Home Celeb Gossip Actor Jerry Mofokeng and his wife Claudine share their secrets to a... 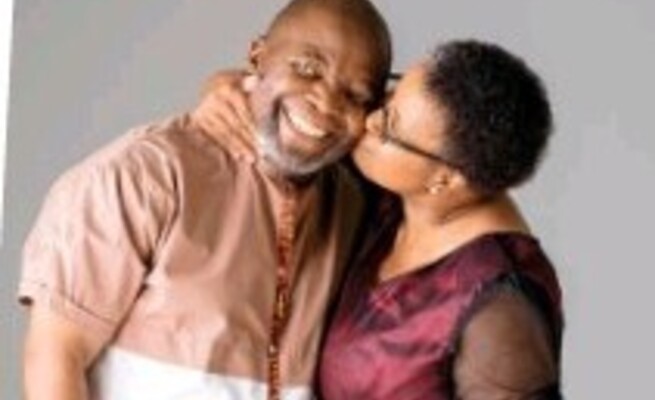 How the ‘old guard' made it, their longevity in marriage; actor Jerry Mofokeng wa Makhetha and his wife Claudine share the secrets behind their happy marriage.

After nearly 40 years together, veteran actor Jerry Mofokeng wa Makhetha and his wife, Claudine, are more like teens who have just found and who are nursing young love with tender gloves. DRUM caught up with the lovebirds at the magazine's Auckland Park offices where Jerry (63) tucked into a fruit salad while stealing ‘romantic' glances at Claudine (62), who was having her makeup done.

Judging from the way he threw glances at her, it was clear he has eyes not just for her, but for her only. The veteran actor recently featured in M-Net’s Trackers and has two other big-screen films set to hit the screens sometime next year, however, for now he and his lovely wife are bracing up to having the family over for a feast on Christmas Day.

They enjoy entertaining their five children and six grandchildren and Jerry lives for Claudine’s oxtail and dumplings.

He was aged 22 when the pair met, yet marriage was the remotest thing from to worry his mind because he was recovering from, and nursing a broken heart.

The girl he was dating at that time had been sent to boarding school in North West but when she returned to Soweto in June that year, he learnt she had ran away with a teacher.
“I was shattered,” Jerry told the publication; “I went to God and
He and I had a frank conversation where I set down my terms. I knew if He had taken her away from me then surely He had something better in store.

He poured his heart to his maker. “In my prayer, I told God women are heartbreakers and I did not want a replacement or a substitute. I vowed to only revisit the idea of a relationship the following year,” he said.

But nature, however, had other plans, only
two months after his chat with God, Jerry bumped into Claudine. “I was taking one of my mentee’s home when I saw his sister at their home,” he recalled; “I had two problems with my attraction to her: first, I did not believe in love at first sight. There was no way I could be in love with someone I had just met.

“My other problem was I had a covenant with God to not be in a relationship until the following year.”

But his feelings grew whenever time he saw Claudine, eventually he began pursuing her.
She did not took her suitor, seriously. “I did not take him seriously. I thought he was just another chancer,” she said with a giggle. He asked her out, telling her he had prayed about it. Claudine said she also needed to pray because she was uncertain about his intentions. In that time, she said, she started having strange frightening dreams in which 'heroic' he would emerge and save her.

“I asked my mom what these dreams meant, and she asked what my relationship with this man was. I told her he had proposed we be in a relationship and she said the dreams meant he was the one. She said my grandmother had similar dreams before she got married,” she recalled.

From there, it all started. “Then one morning in December I woke up missing him with every fibre of my being. I missed him like my next breath depended on seeing or talking to him. I couldn’t breathe properly until I phoned him,” she said.

Jerry was away at a camp meeting for youths, and was due to return the following month. “While I was there, she phoned and said four words I have never forgotten.
She said, ‘ I am missing you’. Man, I could not wait to get back home,” he said.

They began seeing each other in January 1979 and nine months later, Jerry sent his family to ask for her hand in marriage and negotiate lobola. They wed in June 1980.

Since then, they have lived a happy ever after love life. According to them the secret to their long-lasting marital life is faith. “God is the main ingredient. He is the glue that holds us together.
But it is also very important to study your partner and meet their needs. If it does not hurt you in any way, indulge them because it makes them happy,” Claudine said.

“I’m a homebody who enjoys reading and he likes to be outdoors. Sometimes I agree to go to nature reserves. While there, I catch up on reading while he wakes up at the crack of dawn to watch lions drinking water. That’s just a simple example of meeting each other’s needs,” she added.

She added that love is not a one way road, as there is always room for compromises from both ends. “Making compromises in your relationship doesn’t mean you’re giving away your power. Being a feminist does not mean being anti- male.

“There is no need to compete with your partner because you are two very different people from different backgrounds. [Learn to] forgive. Forgiveness in the presence of God is an everyday decision,” she said.

Jerry heeded the words his father-in-law shared at their wedding reception. “He said love must be serviced. You cannot be on autopilot in marriage. Everything that is expensive and is of value needs to be serviced at an authorised workshop – the same applies to marriage.

“We read a lot of literature about love, courtship and marriage. That’s just one of the secrets that’s kept us together all these years. Also, I am Mr Surprise. It is tough lying when I’m preparing the surprise but once it’s revealed, the smile on her face makes it all worth it,” he said.

After nearly 40 years of marriage, he is clearly still smitten with Claudine. “She is amazing. She’s a nurse by profession, but she is really a nurse all around. She makes me feel like a king. She knows when to feed me, when to advise and when to forgive. Part of the servicing is correcting each other using the right language, at the right time and with an even sprinkling of love,” he said.

The actor added that his wife is the wind beneath his wings, and because of her, he can soar to dizzy heights. She studies with him when he needs to learn his scripts. “I end up knowing all the lines and reciting them when he is on stage. I enjoy theatre productions more than film,” she said.

Just like any other, she has likes certain characters of her husband’s many roles, Claudine’s favourite characters are Ntate in When We were Black and when he played a man accused of killing his wife in a theatre production called Sus.

“Those roles were extremely powerful and moving,” she said.

With his rich experience in the industry, Jerry has some advice for those wanting to make a name in showbiz. “Keep growing. Never stagnate. Discipline and professionalism are not negotiable. They should be the bare minimum. Lastly, be a good human to work with,” he said.