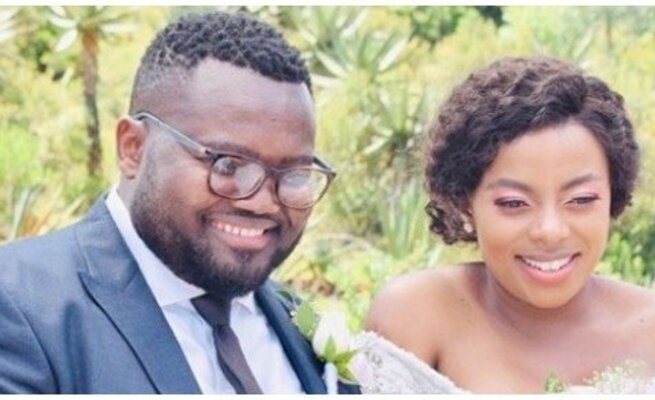 The 2019 will go down in South African entertainment history as having had been the year of celebrity weddings and as it draws to a close, Micasa’s Dr Duda could not be left behind, he danced to the year’s theme by tying the knot with his girlfriend, Karabo Maroga over the weekend.

Taking to his Instagram page to dish out the exciting news, Micasa’s lead singer, J Something posted a picture of Dr Duda in photo stance flanked by his wife and two children who were all clad in matching IsiXhosa traditional attire.

“Congratulations my brother @dr_duda on your wedding! I am super proud of you and honoured to have been apart of yours and Karabo's special day! May your bond grow from strength to strength. It’s been really special being your friend for nearly 10 years ?Ladies & gentlemen… I present to you the Mphalhaza family!,” he wrote.

Meanwhile, the friends and relatives of the newly weds also could not be outdone in the complements section, they took to Instagram, a notch higher to share pictures and video clips of both the traditional and white weddings under the hashtag #DrDudaWedsKarabo.

DJ DR. DUDA He was born in 1981 July the 18th at Mathyszenloop kwaNdebele in Mpumalanga Province. His real names are Sipho Phillemon Mphahlaza. His love of music started when he was about 8 years old in 1990 after he joined the band called SOUNDS OF HEAVEN playing a keyboard in church. He attended Njomane Primary School, Phaphamani Primary School and matriculated at Dumeleni High School in 2002.

He was first introduced to Fruity Loops software in 2002 by his neighbour and teacher Mr. Pat Mahlangu. The latter encouraged him to practice this software harder so as to master it. It was fortunate for Duda because Mr. Mahlangu had a computer.

In 2003 he teamed up with the local DJ known as DJ Storm, composed and produced the album titled 'Action 1'.He was nicknamed 'Bhubesi'. He then went on to team up with another local group called May and the Elements in 2004 and released an album called 'Is'khethu'. After this album Duda wanted to quit as he thought that his talent was going to waste. Fortunately, in Mr. Mahlangu he had the father-figure, advisor, teacher and a friend who encouraged him to be patient and continue to practice until the time was right.

He was given a trade name 'Duda' by Mr. Pat Mahlangu because he felt he was good music which the latter compared it to the instrument in the fruity loops software called 'duda'.
When DJ Mbuso moved from Soul Candi to form Phezulu records, Duda was highly confused and did not know what future holds for him. Somehow he felt that was the beginning of the end. But Mr. Pat Mahlangu encouraged him to be patient and wait for Mbuso to settle at Phezulu. After continued contacts with Mbuso, Duda was relived when DJ Mbuso informed him about the intended project called 'House Prescription' produced by the duo calling themselves 'Dr Duda and Dr M-bee'. He also performed around the country including Botswana. Presently he is about to release a second album titled HOUSE PRESCRIPTION + 2 BY DR.DUDA The rest is history…