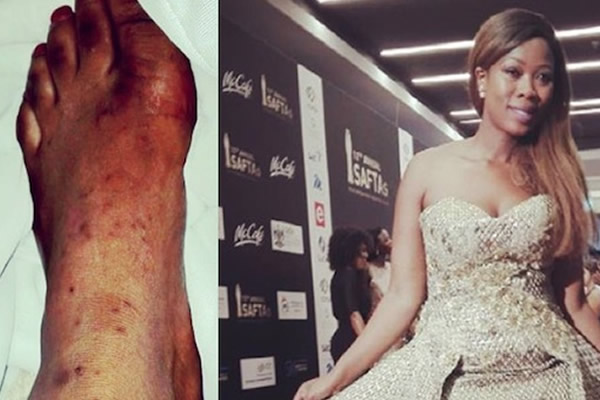 Skolopad's return to the Samas was almost cut short after she got a skin rash that left her whole body filled with black marks.

She said she had already chosen an outfit that revealed her bum and thighs, but had to change her wardrobe choice after the rash got the better of her body.

Skolopad posted a picture of the rash on her Instagram account and asked for help on how to soothe it.

She told TshisaLIVE that the skin problem is the work of the devil and it is because someone doesn't want her to attend the big event.

"I'm so shooketh. I don’t want to miss the Samas for anything. I'm meeting my designer on Thursday to make another dress."

While Skolopad blames the devil for her skin disease, others were quick to blame her decision to date married men.

"Skolopad shouldn't blame the devil over her mysterious skin disease. She openly revealed that she loves having se_x with married men, and the men's wives have bewitched her," sangoma Maqhawe Ngwebu from Polokwane told Cebel Gossip.

Earlier this month Skolopad announced that she wanted to date married men and within a few days her father received two requests from married men showing interest in dating her. The men are said to have asked Skolopad's dad to help them so that they can have se_x with Skolopad.

Surprisingly, Skolopad claimed that she had no intentions of snatching people's husbands.

"All I was saying was, because of my situation, it would be better if I dated men who didn't have certain expectations from me. Like, if I dated married men, then they would make me happy and I would make them happy but they would have their wives to fill in where I can't."