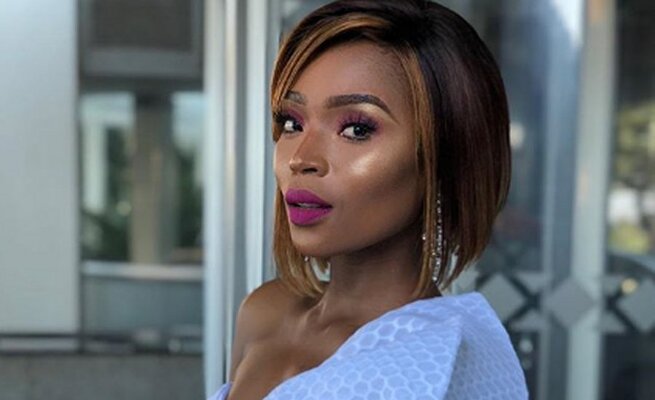 “I am so disgustingly single its crazy. I am tired of being single. I just want to say to all the guys who have wanted to ask me out (but were scared) thinking I have a man, come through because I am very single. Dear future bae, I am ready.”

At times, her mind tells her that she knew her character very well from all stand points, but Motsoaledi Setumo was taken by surprise by how Mmabatho’s dramatic storyline is unfolding in Mzansi Magic’s hit telenovela The Queen.

Mmabatho happened to find out only recently, that her beloved mother, whom she believed died in a taxi crash, was in fact murdered by her now late husband Shaka Khoza (played by SK Khoza) by means of a bomb he planted in her car.

Angry at him posthumously, for killing her mother and furious that he’s no longer available to answer for his sins, she refuses to mourn Shaka. Neither is she willing to claim a share in his estate, she is totally detached from him, and wants nothing to do with the funeral arrangements, insisting she won’t even sit on the mourning mattress.

“I was shocked when I saw the direction the script was taking,” Motsoaledi (28) told Move magazine. “I read the script and I said,‘ Bathathe wena, girl’(You go, girl).”

Motsoaledi was delighted as she told Move magazine how her character has transformed into such a strong woman. “I absolutely love this version of Mmabatho. I love how she has changed. To a certain extent, she was beginning to bore me. She was too calm and accepting of everything. I mean, as a human, who is that calm about everything?

“I love how the writers have found something that has triggered her
to show she has another side to her personality. She is showing a side I do not even think she knew she had. I love this switch up. It is amazing to act out,” she said.

Motsoaledi explained that Mmabatho is totally not happy with her aunt, Gracious (played by Rami Chuene), for hiding the truth from her regarding the man she was so in love with when she moved to Johannesburg.

“Her aunt is her blood and she raised her. She even put her through school. When she first arrived in Johannesburg all she wanted was to be a good doctor, she did not expect to meet and fall in love with Shaka. She is especially angry with Gracious because she could have saved her the grief and heartache if she told her from the beginning that Shaka had killed her mother.

“Now she has to deal with the fact that the love of her life is responsible for the death of her mother and that is hard to reconcile in her head. It is painful for her, and Shaka is not here to answer.

“He was her first love and she cared deeply about him, but she does not want to be naive about this newfound information. She is trying to come to terms with what has happened, and she does not know who to trust,” Motsoaledi said.

“She is fighting emotions because the Christian in her wants to forgive but the normal human in her says, ‘Hell, no!’” Motsoaledi added.

However, the actress is happy with all the sides of Mmabatho.“I like her innocence, even in an ugly and cruel world. But I also like the strong and fierce Mmabatho. I can relate to that. I am a very sweet person, but ungangi jwayeli kabi (do not mess with me),” she said sternly.

ROLLING WITH THE PUNCHES

Motsoaledi had always liked to be on TV and in the quest, she ended up doing media studies, which she was sure would help her in the industry. She proceeded to work as a content producer for Radio 2000 before she was spotted with industry players at a workshop, and was called to audition for a role in Generations: The Legacy.

“I was young when I landed the role of Thabi. I was 24 and I was not ready for how harsh viewers could be. People broke me down because I was naked on national TV, which was not true. I was in lingerie and my co-star Smanga [Moopi Mothibeli] was in his boxers, but no one went at him.

“I received more hate when I was on Greed & Desire playing Tselane because I had acne. I was bothered because it was not something I could control. No one wants to have acne. They made memes and made fun of me,” she said.

Motsoaledi was battle-hardened, by the negative comments she received, and had grown a thick skin by the time she started on The Queen. “I was not bothered by the opinions of strangers,” she said confidently.

Nowadays, in a twist of fate for the better, she no longer has problem skin and proudly walks around with a face free of makeup.

Despite the fact that the young actress’ star is rising high up in the sky, and shining bright, she has plans to get out of showbiz one day, and become a businesswoman. “I have always said I do not want to act forever. I want to be out of the industry by 35 and focus on my business,” said Motsoaledi, who was not willing to talk much about her business.

Interestingly, she was open enough with regards to her love life. “I am so disgustingly single its crazy. I am tired of being single. In fact, maybe Mzansi Magic should hook a sister up with a season of Bachelorette with Mo,” she joked.

“I just want to say to all the guys who have wanted to shela me but had gwababa (ask me out but were scared) thinking I have a man, come through because I am very single. Dear future bae, I am ready.

“This is going to be my third Christmas being single and that cannot be right at my big age.

“I want to experience a good healthy relationship with a man who is kind, respectful, ready for love and is emotionally available,” she said