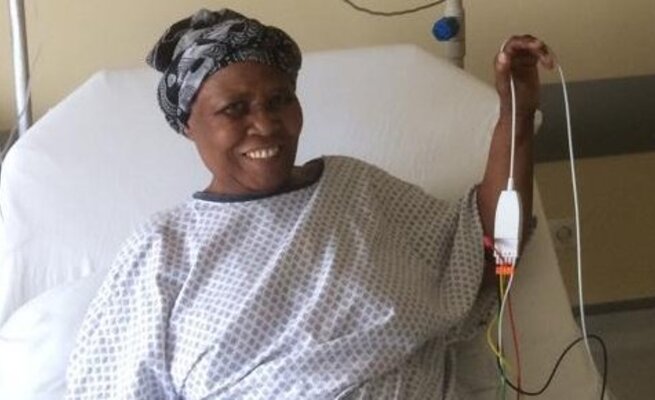 One of South Africa's living musical legends Madosini Latozi Mpahleni who suffered heart-complications during a performance in France last week, is failing to fly back home because she is broke.

She is now in need of financial assistance, after her health insurance company denied to help her.
The 76-year-old showbiz veteran has been hospitalised in Annecy, and is said to struggling to come back to SA, due to financial constraints.

Affectionately known as Mama Madosini, turned a household name for her prowess in playing instruments among them the uhadi, mhrubhe and the jaws harp. Her stage name is Madosini and is viewed as a "national treasure" in her field of endeavour.

As stated by Pedro Espi-Sanchis, who accompanied the Xhosa icon in music on her trip, Modisini was scheduled for three performances in Europe on 13, 14 and 15 November.

Madosini speaks only isiXhosa and is unable to read or write

According to Pedro, Modisini suddenly collapsed on the street on her way to Geneva for her third performance. "She collapsed in the street and had to be admitted to the Clinique Mutualiste in Lyon where she was stabilised," said Pedro.

The veteran artist reportedly left the healthcare centre feeling "fully restored and in good spirits," but while driving to the performance in Geneva later that day she asked to use the bathroom and collapsed again, and was admitted to the hospital in Annecy.

"An urgent medical repatriation for her needs to happen this week," said Pedro in a statement.
Pedro said, Mama Madosini is in a need of urgent financial assistance to get back home where she can be with her family and receive further medical treatment.

Documents obtained by Channel24 revealed communication between Pedro and Hollard. The insurance group, who provided the musician with travel protection for the duration of her trip.

According to the documents Hollard rejected the claim, saying: "The policy does not cover claims related to cardiovascular conditions, where you received treatment for a cardiovascular condition any time prior to your trip."
Emails also show that Pedro has been in touch with the Department of International Relations and Cooperation, who said that they are "unable to provide financial assistance."

Channel24 reached out to the Department of Arts and Culture Chief Director Charles Mabaso, who was unable to comment on the matter at that time.

For now, the main wish of Pedro is that Modisini returns to South Africa and "avoid further costs".
"Each additional day she spends in France adds to her isolation and costs about 2000 Euros," Pedro says in one email.

This article will be updated once more information becomes available.