Home Celeb Gossip Kwaito star Brickz's girlfriend (35) vows not to have sex with anyone...

They can’t hold hands, go on dates or do any of the romantic things other couples do. But these lovebirds have kept their love strong – despite the fact that one of them is a jailbird. Sweety My Baby hitmaker Brickz, real name Sipho Ndlovu, is in love.

He’s in a committed relationship with an aspiring rapper who goes by the name Cazo Cas (35) and they’re still going strong after three years. Cazo knows why he’s behind bars, Brickz tells us through a family member.

“She knows everything about me and has really brought a smile to my face.” They’re head over heels, he confirms, and she’s the one keeping up his spirits as he serves his 15-year jail sentence for rape at Krugersdorp Correctional Services. “We’re a praying couple and are extremely open with each other.” 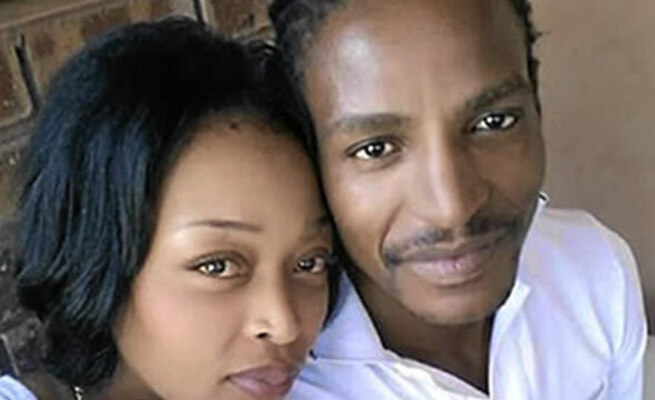 Brickz was found guilty of raping his niece at his home in Ruimsig, west of Johannesburg, in November 2013. He was sentenced to jail for 15 years. But Cazo stood by Brickz throughout the trial. She doesn’t care what other people think of their relationship, she tells DRUM.

“It’s not like we just started dating now, we know a lot about each other. We’ve been together for three years now. “I was attracted to him because of his personality. He’s a very good person.”

“We ended up at an event together and that was the first time I met him face to face. I knew the case was going on so the first thing I asked him was, ‘Did you do it?’, and he said ‘no’.

From the way he told me, I took his word for it. He told me stuff about the case I didn’t know.

“We were friends before we started dating and he opened up to me. “I was there for him and took care of him. After a while I got to see the type of person he is. I saw he’s a beautiful person and I started falling in love.”

Cazo’s love for Brickz didn’t waver, even after he was found guilty.

She can’t wait for Brickz to be released from jail so they can spend time together. “When it comes to us dealing with him being in prison, we take it a day at a time,” Cazo says.

“I’m not a negative person. I have hope he’ll come back, I don’t think he’s going to be there all these years. I understand the situation he’s in.”

The couple keep their love flaming through love letters, and she’s also a regular Sunday visitor to the prison. “I get excited for Sundays, that’s our favourite day.”

Dating someone behind bars is tough but she knew what she was getting herself into before Brickz was convicted. The lovebirds were staying together at his grandmother’s house before he was sentenced, Cazo reveals.

“There were times when he’d go away for work, so I’m just handling this as if he’s gone away. I think I’m a strong person, it’s not like he has passed away. He’s still alive, he is still healthy, we talk, so it’s not like he’s never coming back. “This is just a little phase we’re going through.”

Cazo is a relatively unknown aspiring rapper and model who’s been trying to make a name for herself in the industry. But she’s not hoping to gain fame from her relationship with Brickz, sources close to the couple say. She just loves him for him.

“She’s very quiet and has a humble personality,” they tell DRUM. She doesn’t focus on the fact that he’s a convicted rapist. According to one friend, Cazo is helping Brickz work on himself while he’s behind bars.

“They’re very close and they both are really focused on protecting each other from what people might say.” Cazo is determined to stay strong for her man.

“He’s behind bars, so I try to put myself in his shoes so I can be strong for him. It won’t be any help to him if I’m emotional and weak. “I make sure that when I’m at home, I stay busy so I don’t have to think too much about what he’s going through.”

Brickz was found guilty of raping his then 17-year-old niece at his rented house in 2013. He was sentenced to 15 years in prison in 2017 and released on R80 000 bail in April last year, pending an appeal against his rape conviction. But after losing the appeal he was sent back to the Krugersdorp prison to resume his sentence. He will be eligible for half-sentence parole in 2023.

She knows everything there is to know about Brickz and the case that led to his incarceration, Cazo says. “I know the true story behind it all. The reason I’m still with him is because I love him. “I don’t know why I should turn my back on him when the whole world has turned their back on him. You don’t judge a person because they’ve sinned differently than you.”

Her family and friends have been supportive of their relationship. “There was a time when I lost a few friends, but they were closed-minded and can’t think for themselves. The people who were in my life part-time started working their way out of it. I’m happy for that because it helped me grow.”

While he serves his time in prison, Brickz’s friends tell us he is no longer angry about the conviction. “He is at peace.”

Cazo is proud of her man. “Sipho is a loving person. He has an open and pure heart. He’s easily accessible and I think that has been his weakness for a while.”

The time behind bars has taught him that “sometimes people can do bad things, but God will always turn a situation around for good”. Brickz, meanwhile, is keeping busy by working on music.

Friends say the fallen rapper is writing every day while also making use of the prison’s educational facilities.

“He’s doing all the subjects available there and he recently passed his maths exams with 62%,” they reveal. “He’s on track to graduate in August.”