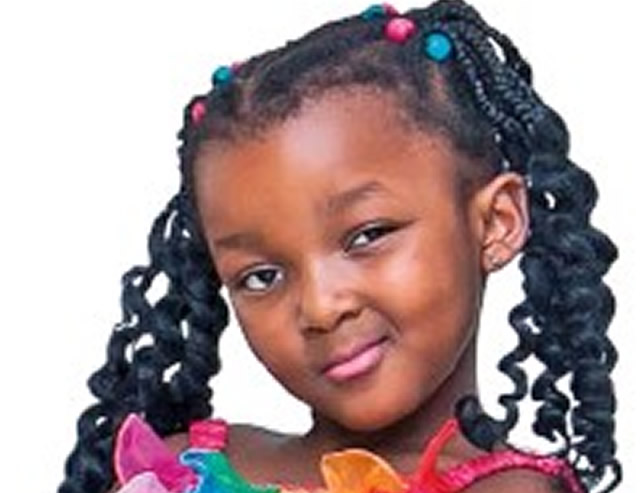 SHE’S only five years old yet thousands of people are watching her every move. Khumo Mahlangu’s parents are no strangers to being in the spotlight, after all her mom Mome Mahlangu shot to fame in the reality show Cream Cartel and dad Tol Ass Mo is a comedian and TV personality. The couple also starred in their own reality series, Mo Love.

Now they’re back with a new show – and they’ve roped in the rest of the family as they give viewers a peek into their private lives in Mo and Mome: Keeping it in the Family.

“Mo Love was just Mo and I, and it was the beginning of how we make it work,” Mome tells us before Toll Ass Mo picks up the story. “The first two seasons were about this crazy couple. With this new

Also known as Khumo Panda, this middle child is the spitting image of her famous father. Yet when it comes to style she takes after trendy mom Mome, who made a name for herself as a fashion stylist before she met Tol

Mome says the little fashionista loves dressing herself – and striking a pose! show it’s still about how we make it work as a family, and how we grow our kids’ careers because they’re all in the entertainment industry.”

Their children Thandolwethu (15), Khumo and TeAmo (1) all star in the new series. The kids were born to entertain, they say. Thandolwethu is an A-student and an up-and-coming rapper but it’s precocious Khumo who’s the one to watch. “We were pregnant with Khumo and everybody already knew her name,” Toll Ass Mo says proudly.

Having trended on social media before she was even born, all eyes are on Khumo whenever she steps out with her famous folks. She has

33 000 followers on Instagram and her own range of children’s cosmetic products.

‘We were pregnant with Khumo and everybody already knew her name’

LIFE IN THE FAST LANE

Swimming lessons, spa treatments and tropical vacations – Khumo has the world at her feet. Mome (36) and Tol Ass Mo (33) love to spoil all their kids and they’d move the world for their precious princess.

The couple splashed out on a sunny seaside holiday in August when they took the family to Zanzibar on Africa’s east coast. There Khumo enjoyed every moment of the family break, frolicking in the waves. “She loves water,” her mom says.

They indulge their children, but they also have rules. “They know everyone has to earn their keep. You get rewarded when you do your chores.”

After taking social media by storm Khumo wanted her own website. She wasn’t sure what she wanted to upload, but it wasn’t long before she and her parents came up with a plan. “Initially she wanted to create her own hand sanitiser because she loves hygiene and believes kids should be clean,” Mome says.

“She also loves it when my hair is natural, she doesn’t like it when I have weaves on. That’s how we got into doing hair products.”

Her parents are incredibly proud of their baby businesswoman. “The best thing you can give your kids is knowledge. We may not be here one day, but they will know it’s possible to start your own thing.”

When their daughter turned three and began to speak, Tol Ass Mo started recording videos and sharing them on social media.

The couple have been criticised for opening social media accounts for their children and exposing them to fame at an early age but putting them in the public eye wasn’t a decision they took lightly. “Growing up in entertainment we know there are always challenges with child stars,” Mome says.

“We try and instil certain qualities in them in terms of them knowing who they surround themselves with, knowing who their friends are and ultimately being able to teach them to know the difference between right and wrong.

“There is nothing wrong with letting your kids be part of entertainment – it’s how you raise them that matters.”