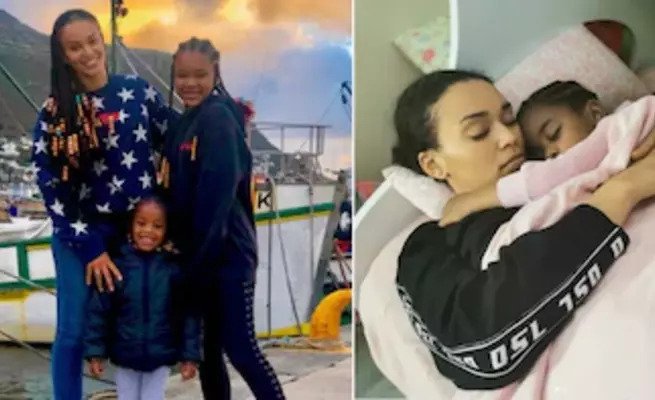 For the first time, Pearl spoke out about Okuhle’s heartwarming adoption story. Seeing the happiness that Okuhle brings Pearl and Thando says it all. Yes, Pearl went from having one daughter to having two with no explanation, but something this perfect makes complete sense on its own.

Pearl recently opened up during an interview with TshisaLIVE and explained how adopting Okuhle was a choice that she felt did not need to be explained as it was her responsibility as an African woman.

Okuhle's adoption was so natural, she has brought so much joy, love, happiness and fulfilment into Pearl and Thando's lives

Speaking on the adoption, Pearl said  it is a lot easier said than done andthat for her it was not even worth questioning

Mzansi was surprised when a precious little princess suddenly started popping up like she was never not there. According to Pearl, Okuhle was the missing piece of the Thusi clan that has now been completed.

Even though Okuhle was not hidden by Pearl, how she joined the family was never something that was openly discussed.

Before adopting Okuhle, Pearl opened a charity in support of abandoned children. Adopting Okuhle has changed Pearl’s life in the most magical way possible. “It's been really incredible.

Mothers, daughters, aunties, sisters and grandmothers all over Africa raise, look after and mother children that are not their blood on a daily basis, so to Pearl, it seemed logical.

I've tried not to make a big deal of it in terms of talking about it. Women do this every day, our grandmothers did this for our parents. There are aunties, women have to travel and then someone has to take care of their children. It's a village and I'm an African and I live by everything that an African means as much as I possibly can.” Pearl highlighted how easy it is for people to support adoption, donate funds etc, but actually adopting a child and raising a human who is not your own is the true test.