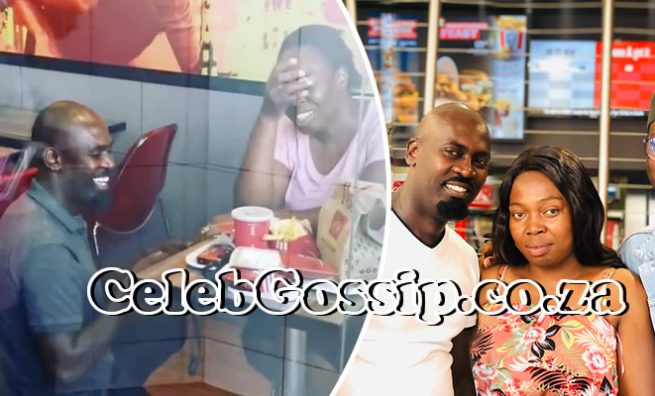 South Africa’s favourite couple has spoken out for the first time since their proposal video at fast food outlet KFC went viral.

Hector Mkansi and Nonhlanhla Soldaat who officially got married in 2012 have been receiving pledges from brands across SA to help fund their wedding after their heartwarming video broke the internet.

However this will not be the couple's first matrimonial service. According to the groom the upcoming ceremony will be their second.

Explaining the timeline of events, the groom had this to say:

* In 2011, the lobola negotiations began

* Lived together till last year 2018 then took out remainder of lobola money.

* Pressure from the church led to them having a formal wedding but not quite what they had envisioned.

* Groom bought her rings but wasn’t quite satisfied with them

* Skip to this week, "I decided to come to KFC to give her a small surprise with a meal"

* "Didn’t tell family anything; wanted it to be a complete surprise with everyone"

* "Team members at KFC helped to bring food with ring. Then I went on my knees with everyone surrounding us"

* Nonhlanhla (bride): I was totally surprised by the paper wrapped ring/s

In a statement released to SowetanLIVE, the love birds who got engaged on Wednesday say they are overwhelmed by the support and would like privacy while they process the day's events.

“Thank you South Africa. Your kindness has truly warmed us. We would have never imagined that our love story would have touched so many of you. While we appreciate the support, we ask that you please give us a moment to take it all in. We will definitely let you know about our plans around the wedding,” they said.

Meanwhile, celebrities and personalities such as DJ Fresh, Ami Faku, Precious the Planner, Zakes Bantwini and Donald have offered their talents to make their wedding day sweeter.

UPDATE: @JoeHuman and I went to go see our couple today and they are besides themselves. 🥰😍

This is a lot to process so they’ve asked for time to figure out their next moves. We’ll try to keep everyone posted with any developments #KFCProposal