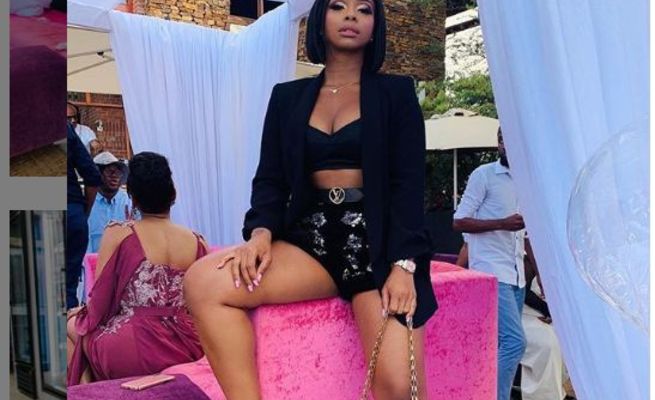 Boity Thulo served one of the hottest looks at this year's MTV Europe Music Awards on Sunday, and in doing so the star posted a sizzling picture of her derrière.

Boity flew to Spain to attend the annual awards which were hosted by Becky G. She wore a Orapeleng Modutle design.

The "Wuz Dat?" hitmaker uploaded a number of pictures of herself on the MTV EMA red carpet but the most popular has been the one of that star posing with her buttocks facing the camera.

Celebrities such as Pearl Thusi and Toke Makinwa all commented on her Instagram post and said she looked hot, while Boity's fans fell into a tizz.

#Boity When you own it you own it🔥🔥 pic.twitter.com/pMb2neqzDG

The thirst in these streets 😂😂😂 pic.twitter.com/HSZ6GsP7So

Ay ay ay u really killing it… Great future behind u🔥🔥🔥🔥

Boity is still in Spain enjoying some time in the sun, has been doing some sightseeing and has visited places like Sevilla City and the Cathédrale De Séville.

Not South Africans only are the ones attracted to Boity's booty, even foreigners are willing to do anything to convince her to sleep with them.

In April last year, the Nigerian superstar, Davido, tried his luck on Boity Thulo, a move which resulted in a nasty confrontation at an up-market Harare hotel after the 30 Billion Concert held at the Harare International Conference Centre (HICC) in Zimbabwe.

It was in the early hours of a Sunday morning after a show that the two were said to have had a bad clash which left some of the five-star Meikles hotel furniture vandalised.

It is then said Boity started throwing tantrums, shouting at Davido. A Zimbabwean wealthy socialite, Genius Kadungure, reportedly tried to intervene and calm the situation down but Boity allegedly slapped him.

A screen shot which later circulated on social media that narrates the incident read:

“Then Davido’s boy was like, I will kill you if you come to Nigeria, you are dead don’t even come. In fact my dad is very powerful man, I will make sure you don’t even pass by the airport,”

In return Boity said: “I don’t care about Nigeria.”