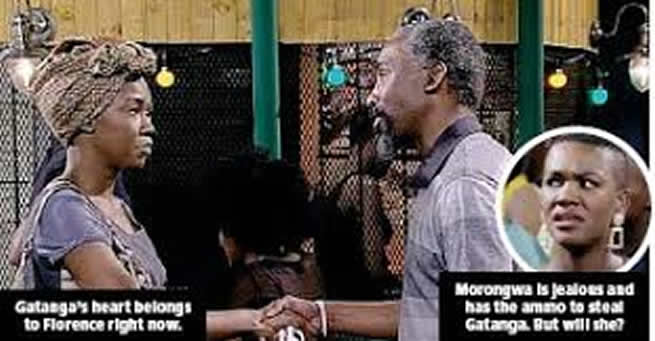 Isidingo love triangle, the heart wants what it wants

Isidingo presents one of the saddest love stories on TV ever, two women are madly in love with one man, who is pleased with both of them, how is he going to pick one over the other?

What qualities is he looking for? Who has those desirable qualities. Morongwa or Florence?
The matter gets fans split into two camps, all because there is no one among the women to love or hate over the other, they both deserve a good and loving man, and all pointers indicate Gatanga is the man.
Gatanga who is a mine worker and inyanga fell in love with Florence, who migrated from Ghana to Horizon Deep in search of greener pastures, to take care of her kids back home.
Florence is a cultured woman, to which Morongwa is not. Gatanga admired Morongwa for a long time, but only from a distance, she is known to be a talkative and frank speaker. However, she has a heart soft as wool, always keen and ready to help, a personal trait that Gatanga loves.
In the end, there could only be one, and Actors Soso Rungqu, Amos Ketlele, and Weza Solange told Move, that the triangle is one if not the saddest love stories they have seen on TV.

In pursuit of love
Soso said the people who had been itching to see Gatanga and Morongwa fall in love are the viewers, because they had witnessed what he had done for her, and also understood how she loves him, and her unmistakable care for him, going as far as boosting her appearance so as to lure his eye.
“This is a classic case of art imitating life, very soon you will see people trying to change themselves to impress a love end. In case Morongwa now start cooking and wearing dresses because that is what Florence does. So she thinks that is what Gatanga wants in a woman,” she shared.
Tension was brewing between the two, and after Soso got the wind that there could be on screen kissing with Amos her co-actor, she prepares for it. And more surprises are in store as the episodes unfold.
“Viewers must stay glued to their television sets. Morongwa is very unpredictable, she even catches me off-guard sometimes,” she joked.
She said she was given the leeway to interpret the character as she understands it, thereby making it more relatable. “I always try to be authentic and natural as possible, Morongwa looks tough but she has her sweet side. No one is one dimensional. Everyone needs to find the balance, otherwise there is no growth,” she said.

The man in the middle
Amos confessed that it was hard and sentimental to shoot the story, because of his knowledge that Gatanga liked Morongwa for a long period.
“I was happy for him, Gatanga is a good man. He is respectable and has integrity. He likes Morongwa because she is bold and fights for others in the community.
“On the other side there is the sweet Florence, who has all the qualities he likes in a woman. She cooks, is soft-spoken, wear dresses and she prays,” he said.
Amos felt awkward to kiss Morongwa on screen as it was his first. He said it was strange for him to do it in front of cast-mates, and rolling cameras, but as an actor, he said he had to follow where the character was taking him.
Amos had been in Gatanga's shoes at one time in his life. In 2006, he found himself in the balancing act of having had to pick between a baby mama, and newly found love. He chose to dump the baby mama, support his child as he pursued the just blooming relationship. He said as a young man he wanted someone to love, and also be loved in return. He added that he is a one woman man and that is currently in a relationship planning to marry.
He called on viewers to brace up for more of the Gatanga, Morongwa in the coming episodes.

The other woman
Weza said for her, things were different in that she was entering a territory in which a relationship was already there, despite the fact that at that time Gatanga and Morongwa were nothing more than just friends.
“Florence was new in town, and had gone through a lot. Gatanga came at the right time. This was the most interesting and mature love triangle ever. It gave a new perspective on how people can handle difficult situations they find themselves in.
“One might expect them to fight over Gatanga, but they were mature. Gatanga asked Morongwa for permission to date Florence. She was willing to let him go despite how she felt about him. I think because Gatanga is older it was handled with grace, classy, and honesty,” she said.
Weza added that according with how the script was crafted, no one would blame Gatanga for choosing Morongwa over Florence as it was a tough decision altogether.
She added that the other interesting element of the triangle is that the heart chooses what it wants, even leaving out wife material and going for a beer drinking woman, as what Gatanga did. Florence is not cross with Gatanga regarding how tender she treated him, but just wants him to be happy. Neither is she angry with Morongwa, who gave her food and shelter in times of need.

All love is said to be a bit jealous though. “When he was with her, I said I want him back. Some women have a way of bringing the best in a man. And you see things you never expect to see. That is what I think happened to Morongwa, once she saw him with Florence, and heard her talking about how wonderful he is. She realises she had a good man and didn’t want to lose him,” said Weza.