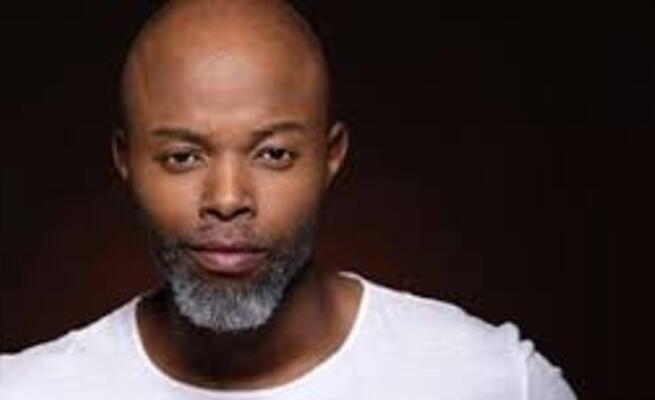 HE’S been in the business for 16 years and has many accomplishments under his belt. But for Thapelo Mokoena, nothing compares to his latest role. “You know when you do something so much it just becomes part of you?” he says. “I feel like that’s when you really begin in anything.”

The five-part series promises to be a heart-stoppingly tense show, with firstclass production quality and a plot that’ll keep viewers on the edge of their seats. Deon is also the supervising screenwriter of the show, ensuring it stays true to the story of the hit novel.

Quinn is one of the main characters, the highly ambitious chief of operations at the presidential bureau of intelligence who’s possibly on a mission to replace his boss.

Gun in hand, bullet vest over his chest, he has a mandate to secure the country and its president – and for Thapelo, it’s been the highlight of his career so far.

“As an actor, your job is to make someone believe you are who you’re portraying, without doubting it for a second,” he says.

“And the toughest thing as an actor is to watch yourself and believe yourself, because you know yourself and you know your weaknesses. For me, the moment I believed myself was in the past year [when we filmed Trackers].”

“We could feel it, we could see it, we could taste it. It was Table Mountain, the beach, ships, guns, choppers. It was just too much – it was a dream.”

Thapelo has brought many roles to life on small and big screens, but none of the characters were quite as layered as Quinn.

“There comes a point when you know the kind of brand you’re building as an actor and I was looking for something like my character in Trackers,” Thapelo says. “A character who’s not one-dimensional.”

HIS character’s multifaceted life mirrors Thapelo’s own to some extent.

“I can relate to the journey he’s on. He’s a man who doesn’t have a nine-to-five life and he’s just brought a life into this world. We’re around the same age – coming of age, entering the next phase of his manhood.”

Thapelo spent six months living in Quinn’s head, taking on his character’s problems while filming in the Mother City. It was challenging but fascinating, he says.

What was even more awe-inspiring was the work that was put into the production, a joint venture between M-Net,

“This was one of the few times when I felt enough investment was being put behind a concept,” he says.

“And we could all bring our A-game with no doubt about where we’re going.”

The action-packed series features organised crime, a killing spree, smuggled diamonds, black rhinos, the CIA, state security, an international terror plot and romance – all of which collide in Cape Town.

Trackers may be the pinnacle of his career but Thapelo is hardly a newcomer to the game. About 8 million South African households were introduced to him when he took on the role of Gabriel in hit SABC1 soapie Generations several years ago.

Gabriel was the young heart-throb hired as the bodyguard of Connie Ferguson’s character Karabo Moroka, and the two ended up in a romantic relationship.

It was a career-defining role. “I can’t shake that character off me. I was a young man kissing Karabo and it was quite topical. That was the moment that established me in South African homes,” Thapelo says.

He was fresh from film school when he landed the part and since then scripts haven’t stopped coming in.

He says there have been times when he’s had to pass on a role because it wasn’t aligned with his thinking at the time. “I walked away from stuff that I felt wasn’t for me. When you’re an actor who understands what you should be looking for, you’re not just going to jump at every brief.”

Thapelo also says the industry needs to start understanding the value of actors. He admires the stand taken by Home Affairs actress Vatiswa Ndara, who recently wrote an open letter to and subsequently met with Nathi Mthethwa, minister of sports, arts and culture, to air the financial and other grievances actors face.

In her letter, she highlights issues such as unfair contractual agreements, lack of royalty payments when shows are rerun on the public broadcaster, and poor remuneration. “What Vatiswa is expressing is the current face of our industry and what faces actors and performers in South Africa,” Thapelo says.

“I know exactly what she’s talking about when it comes to how we’re valued as artists. The only solution I have for myself when it comes to that is to understand my offering and my art. So much so that I can easily equate it and evaluate it for you and show it to you. And if you disagree with that evaluation, we all have the right to either walk into this thing or walk away.”

WITH Trackers being broadcast internationally too, it makes sense that his next stop would be the world stage, so Thapelo recently went to the USA with a view to broadening his global appeal.

“Being more connected to the global community as an artist is where my future lies. That’s where my satisfaction and fulfilment are,” he says.

He also has business interests outside the acting world. This includes his partnership with the local Bosman Family Vineyards to produce Nero wine, made from Italian Nero d’Avola grapes which are able to thrive in harsh climates. And his hectic schedule extends to his home life where, for the past five years, nappies, prams and playgrounds have been a feature of everyday life. In 2014 he and his entrepreneur wife, Lesego (34), welcomed their first son, Lereko (5), and last year Lereko’s baby brother, Lefika (1), was born.

The couple have been married for seven years, and Thapelo says while there’s no formula to keeping the marriage torch lit, the love he shares with the woman he affectionately calls “my girl” keeps them connected.

“I don’t know what the secret is. I’ve got a friend in my girl. She’s got a friend in me. We’ve lived in each other’s spaces for the past seven years and more of our lives. Really, this is the one person who should have my back – and whose back I should have,” he tells us.

The pair have also set their minds on travelling. “My wife and I always say we have to make sure we travel. When we go, we’re better businesspeople, better people and better lovers. We’re just better because we get out of a cocoon.” Trackers airs on M-Net (DStv channel 101) at 8pm on Sundays from 27 October.