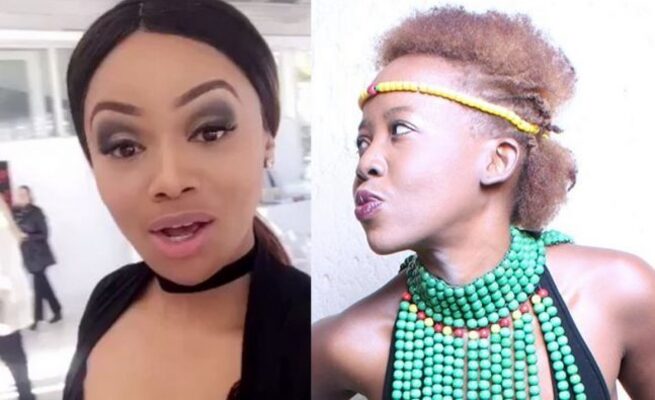 It seems Bonang Matheba has finally cracked after years of being featured on poet and musician Ntsiki Mazwai’s debates on talent and the concept of black excellence in South Africa.

Mazwai has always used Bonang as an example of those who apparently don’t own their success in the entertainment industry. She said most of those who were successful had white capital backing and used Zodwa Wabantu to argue her case.

“Stop making us clap hands for a sick system,” she said.

In a series of recent tweets, Mazwai said she found Zodwa Wabantu to be more successful and bigger than most celebrities, arguing that she was her own business.

“It’s gonna hurt you when I tell you that Zodwa is a bigger force than Bonang because when you take Woolworths away from Bonang what do you have? No deal you can take away from Zodwa… she will continue.”

It's gonna hurt you when I tell you that Zodwa is a bigger force than Bonang because when you take Woolworths away from Bonang what do you have??? No deal you can take away from Zodwa…..she will continue

“This was never about Bonang and Zodwa but continue so white people can eat while we are distracted by personality politics. For me, I feel like Zodwa is more worthy of respect, to be honest. Because she has shown us her darkness. Bonang hides her darkness. And for me, hidden darkness is usually bigger. So yeah let’s disagree.

“You will think it’s an attack on Bonang or Black Coffee… that’s how whites keep you from actually confronting the bullsh*t system. Zodwa is the top female at the moment in the entertainment industry whether she sings or not. Black excellence is the one that makes money for whites.”

Her comments sparked a debate, as usual, with some agreeing with her sentiments, while others told her to focus her energy on building her career instead of talking about Bonang and her success.

At the time, Bonang made a post on social media that left her followers assuming she was responding to Mazwai.

She said: “Underachievers have too much to say. It’s weird.”

Underachievers have too much to say. It’s weird.

But today she has finally made it clear she was not impressed with Mazwai’s comments.

“Keep this energy when you see me,” she said, leaving fans hoping for this meeting to happen soon as they debate on how Mazwai will be dealt with.

Keep this energy when you see me. @ntsikimazwai