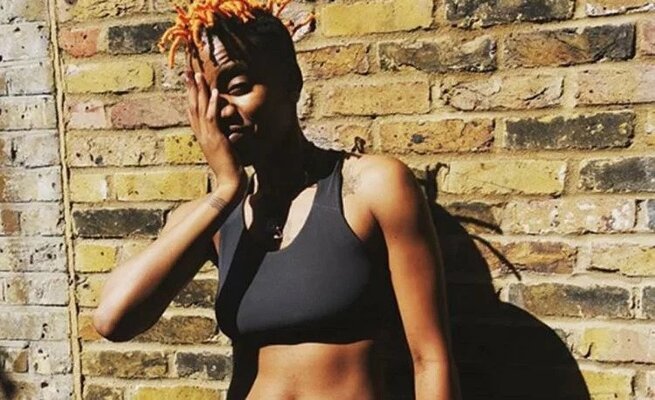 Toya Delazy has a new sound which is a hybrid born out of a cross-breed between Zulu and United Kingdom's ground sound, she has accompanied it by a new look.
However, not everyone is happy about the her new look, they think she doesn’t look that healthy.
The singer made it public a few weeks ago that she will be creating own and unique hybrid sound called
“Afro-rave”.
According to her, the Afro-rave genre was inspired from her living in London, where she is currently based, not forgetting the Zulu from her native country (South Africa).
The sound came with the release of her single, Funani, accompanied by a colourful music video. While many of her fans praised her for taking her music to a higher and next level, describing her new
music video as ‘art.’
But it is her new look that has got some of her fans talking. Some are concerned that Toya appears unhealthy, skinnier than usual.
One person went far enough to suggest that she looked like she was on drugs.
“Ladies and gentlemen… this Toya Delazy looking like a nyaope addict,” said the fan.

Another fan said while she was at it, somebody needs to warn her about the danger of drugs.
Another user added: “I just saw Toya Delazy pics she doesn’t look okay, she’s so pale.”
Toya Delazy also received unfavorable sentiments about her looks on Facebook, after she posted the picture of herself.
She opted to respond to some of the comments. Toya admitted, and explained that she did shed some weight after the death of her grandmother, Irene Buthelezi – the wife of IFP leader Mangosuthu Buthelezi. But Toya assured her followers that she is doing okay

“I really would like to understand why you are so mean to me – what I have done to deserve this? My
blood is on your hands, I’m living a healthy good life, I’m happy, I did lose weight when my grandmother
passed away earlier this year it was a really hard time for me but since then I have been healing.
“Everyone that has said something mean I hope you proud of yourself, you a bully and don’t deserve
me,” she wrote on Facebook.

One Facebook user pointed out that Toya';s tone sounded as if she was depressed and should try taking
an anti-depressant, but the she disagreed.
“No ways anti-depressant make you worse, I went through the worst I’m fine babes! I actually haven’t been better, I’m fit, I’m strong I love myself,” Toya wrote.

“Have you noticed how all the mean comments come from black people. My own people. This is how
you speak to women and most of them are men. For argument sake even if I was f**ked up , which
community builds up a woman the way you are doing… I’m glad I’m surrounded by love and I know my
worth and love myself ,so I am not shaken by you boys.
“My message is be what you want. This is exactly why I have made the song called FUNANI because people will come into your life and try discourage you, and try tear you down and mock how you look
but you should never let that stop you from achieving what YOU want,” she wrote.
Latoya Nontokozo Buthelezi (born 5 February 1990), professionally known as Toya Delazy, is a South
African singer, pianist, dancer and performer from KwaZulu-Natal. Delazy was nominated in the Best
International Act (Africa) category at the 2013 BET Awards. Her debut studio album Due Drop was
supported by five singles: 'Pump It On', 'Love Is in the Air', 'Are You Gonna Stay?', 'Heart' and
'Memoriam'. Following the release of her debut studio album, Delazy took home two awards, including
Newcomer of the Year at the 2013 SAMAs. She made a major impact on South African top 40 radio.