Socialite and businesswoman, Babalwa Mneno, has taken being a 'generous friend' to a whole new level, She sent her friend, Khanyi Mbau R10 000 and told her to go buy herself a Barbie doll.

Babalwa Mneno is definitely one of a kind. How many people would send their friends thousands and tell them to go buy a doll with the money? That's just what Babalwa, a successful businesswoman and popular socialite, did. She sent her friend, actress Khanyi Mbau, R10 000 and told her to buy herself a Barbie doll. Khanyi boasted with the random and very generous act by her friend on social media.

That is a lot of money to send to someone for such a frivolous reason – for many South Africans that is more than a month's salary. But when you're a celeb and business-savvy lady like Babalwa, that kind of money is nothing. Apparently. Babalwa is friends with many local celebs and although we don't get to see it, we're sure she treats them all to amazing 'gifts' like this. 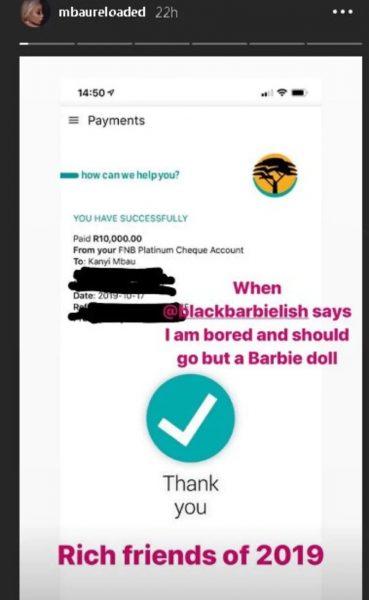 Some people have all the luck.