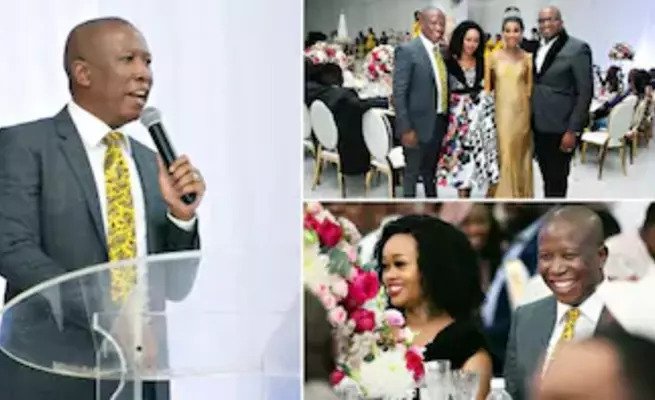 Julius Malema and his stunning wife, Mantwa Matlala, attended yet another wedding

– The EFF leader posted several snaps of the celebrations on Twitter

– The images show Juju speaking at the wedding as well

On Sunday, EFF leader Julius Malema took to social media to share photos of how he and his wife spent the weekend.

Juju posted several snaps of him and his wifey at a wedding. The EFF leader wrote about having a bad day but ending it celebrating love with his wife by his side.

The footage sparked mixed reactions with some accusing the EFF leader of misusing VBS money to fund his lavish lifestyle.

Siseko Davani, who goes by the Twitter handle @MsebzSiseko, commented: "Your days are numbered chief… Soon you'll be wearing orange overalls and prisoners will deal with you decisively at night."

Another tweep, @Ntsakzin, added: "You even speak in weddings now, nice warra!"

Celeb Gossip Skhumba Hlongwane - 11 May 2021 0
Bonang Matheba has been minding her business and getting her coin. However, she has found herself getting dragged into AKA’s drama where he stands...

Celeb Gossip Lovemore Lue - 11 May 2021 0
Since the appointment of the new Zulu King Misuzulu Zulu after the death of his father many people are ecstatic to have a king...