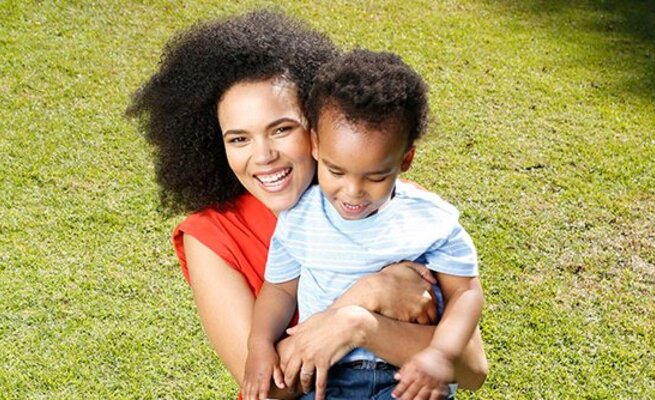 Celeb couple Phumeza and Shota Mdabe have lived up to their wedding vows, of standing by each through thick and thin, love and determination have led them to dealt with their son’s cancer battle –and are happy to tell their triumphant tale.
They were living their desired lives with their careers on the ascendancy, their marriage rites were completed, which was complimented by the arrival of a blessing, a bouncing baby boy, Mpilo.

Then came the test of their love, unity, and determination Phumeza ( 31) and Mnqobi “Shota” Mdabe (43)'s son was diagnosed with eye cancer and what followed was years of grief, and diminishing success. Finally, they bent to old saying 'change what you can, and accept what you cannot change, they accepted their son's condition and moved on.

They once went into hibernation, as they took care of their son, but now they are back in the fold.

Phumeza plays Anele in SABC3’s Isidingo and has also collaborated with her hubby on a new song, Injabulo, which means happiness.

“We’ve been through a lot and this is our time to be happy. Things are fine at home. We’re happy,” they told DRUM.

Finding their feet again after the setback had not been easy for the celeb couple. Shota is set to release his solo House track titled Tsa Rona.

The arrival of Mpilo came as an icing on the cake for them. “We were very happy,” Phumeza said; “Shota had just finished paying lobola, so it was a nice surprise.”

Little they knew that a year later, they were to be devastated, as Mpilo (now 6) who was born two weeks before his due date, weighing 3,7kg was diagnosed with cancer.

“His irises were pitch black. I remember asking my wife why his eyes were awkward,” Shota recalled; “They weren’t warm.”

As he grew older, Mpilo’s eyes turned squint and whenever they took a picture of him, a white spot would appear in his eyes on the photograph. “Since I don’t know my biological father, I thought maybe his eye colour was changing to blue or green,” Phumeza said.

When he was a year old, they went to see an optometrist so as to get his squint fixed. “He said the bridge of Mpilo’s nose is going to grow and pull his eyes back into the proper position,” they recalled.

Three months down the line, they noticed their son was suddenly feeling his way around the house when he walked. In December 2014 they took Mpilo back to the optometrist.

“We wanted to get his eyes fixed as a Christmas present. But he was referred to an eye specialist at Johannesburg Eye Hospital for further examination. Three days before Christmas Mpilo was diagnosed with a rare form of eye cancer called bilateral retinoblastoma,” they said.

The worried parents were told the cancer had spread through the optic nerve on the right eye.

“They said they can try to save the left eye but can’t promise us anything. Mpilo was referred to Life Fourways Hospital for MRI scans to check if the cancer had spread elsewhere in his body.

“The cancer was at stage 4 – we thought he was already dying,” Phumeza recounted.

On 31 December, he started chemotherapy unfortunately, the doctors couldn’t save his eye. “I was looking at him thinking, ‘My son doesn’t know what awaits him’. He was about to lose his eye and there was nothing we could do to save it,” Shota said.

Then came the test of their courage as they had to stand strong for Mpilo and his three siblings, Sibusiso (25), Khumo (13) and Mpho (11). The two eldest kids are from Shota’s previous relationship.

Two years later, Mpilo’s health took a downturn. “We had to fly to Cape Town to get radiation. Mpilo had been through chemo, but his eye was red,” Phumeza recalled.

After the doctors told them he was not responding to treatment, they had to chose to have Mpilo’s other eye removed. “We wanted him to be free of cancer. He was in pain and it was also a danger to his life,” they said.

After the surgeries, Mpilo received prosthetic eyes that cost R50 000. Despite all the hospital visits he was lively and kept their spirits up. “He was carrying on with his life. He was playing like any normal child,” Phumeza added smiling:

“We’d walk around the hospital with the drip in his arm. He didn’t want to sit on his bed. He would vomit and be out playing five minutes later. He really helped us get through this.”

Their careers were beaming brightly when they had to bow out of showbiz.

“We were living our best lives, but God took us back to the beginning.”
Shota cancelled bookings. “We needed the money for his treatment, but I couldn’t leave him and travel the world,” Phumeza said.

They had to let go some of their possessions too.

“He thought I was being insensitive when I said we need to lose the cars to accommodate our financial situation.

“Boys love cars. He has his own taste in cars, and it wasn’t easy for him to let go,” she added.

As the medical bills swelled up, they went further as cutting down on movie nights and shopping sprees.

They also put their trust in God, praying three times a week, giving thanks for blessings and asking God to give them strength.

Mpilo's own fighting spirit helped them too.

“He doesn’t know he’s blind. Sometimes he asks us why we tell people he’s blind because he isn’t. He says he can see,” Shota said, laughing.

The couple have started the Mpilo Foundation. “We want him to help other kids, to be on the forefront, because we can only imagine what a blind person goes through, but he understands it.”

The foundation will focus on obtaining special toys for the visually impaired, artificial eyes and in time, education.

Mpilo, who’s been cancer-free for almost three years, has been accepted for Grade R at Holy Family College in Parktown. “We struggled to get him in a school as there aren’t enough schools for the blind. The government schools are full.”

That the reason why his parents want to build a state-of-the-art school for the visually impaired. “Sometimes these kids end up not going to school because there aren’t enough schools. We just need financial support to help them and make them feel normal,” they said.