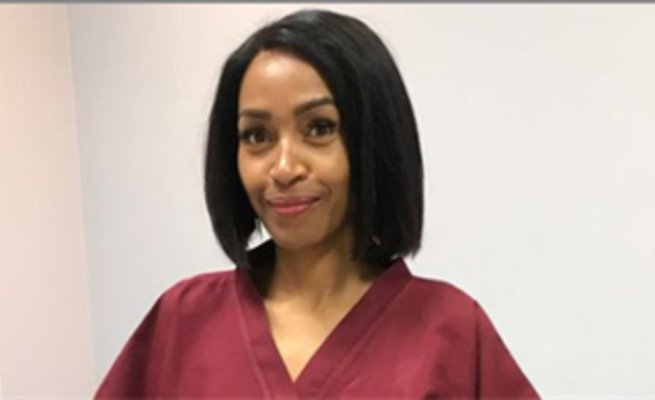 When Skeem Saam's Makgofe Moagi initially announced her pregnancy on social media in August 2019, her fans went into jubilant mode, congratulatory messages flooded her social media accounts for weeks, she is now a happy mother of twins, Caydena a boy and a girl, Gabriella.

Makgofe who plays Charity Ramabu, is a bit superstitious she has been keeping the good news a secret because she was brought up with the belief that exposing it too early could delay her blessings.

Now that her source of joy has finally arrived, two weeks ago to be more specific, it is now safe for her to tell the world.

For some time, she hasn’t featured on the SABC 1 drama series regularly all because she was pregnant, and she is now raring to go.

“Yes, I am now a mother of four,” she proudly told Move magazine recently.

She now has four children Sasha and Mogau and twins a boy Caydena and Gabriella she nicknamed Beyonce for being the only girl in the house.

Although she is on social media, but she is very secretive (guard her privacy jealously) on what she lets the world know about her family, a rule she was raised to live with. For the same reason, she never talks much about her partner too.

“When you want to show the world something, show them the finished product. Sometimes talking too much about your personal life to people delays your breakthrough…,” Makgofe said.

The other reason why she kept a low profile during her pregnancy, was that she was put on bed rest and she had to live by that.

Her pregnancy was not only a surprise, in that it brought twins, but also for it happening at the age of 39, especially after having had experienced a series of reproductive health problems sometime in her girlhood.

“I never thought I would have children. I have had five cysts removed and suffered from a bad case of endometriosis (when tissue that lines the uterus grows on other pelvic organs such as the ovaries or fallopian tubes),” she told Move.

During her high school days in Phalaborwa, she would experience serious period pains every month.

“At times I would even not attend school for days, that’s how bad it was. My periods were heavy and painful,” she said.

Her mother Maria Moagi, who shared a very close relationship, stood by her and helped much as needed at that young age.

After going through such a torrid experience, she is now passionate about women’s reproductive health and offers counselling with regards to endometriosis and infertility.

“There are women suffering silently with it.

“Children are a blessing and they come in their own time. You cannot force God or ancestors. Be kind women. You don’t know their story,” she said referring to women who are often expected to have children by a certain age.

Usually, women who don’t conceive when expected, are made to feel worthless. Her post went in synch with so many who flooded her inbox.

“Some thanked me for talking about it because it’s something they are going through. Others said ‘my in-laws are actually encouraging my husband to cheat’.

“Sometimes it’s not the woman who has the problem but the man and that’s something that not talked about. To women struggling to conceive or are praying for something, God’s timing is the best. But don’t just pray, consult, get professional help too,” she added.

Before the twins; Makgofe had wanted another child, but she had to wait for God’s time.

“We wanted to expand the family but we didn’t know how God would bless us. You know when you want something so bad that you always think about it? But the moment I stopped worrying about it, that’s when it happened,” she said.

Now a mother of three boys and a girl, she thinks that is enough for her, and being a mother is her most precious gift.

She proceeded; “I have been in the industry for years now, but I’m still grounded. That is simply how I was raised. That’s why my children are my biggest project at the moment. I look forward to fulfilling my responsibility to mould them, teach them principles.”

READY FOR THE SET LIFE AGAIN

She is now ready to get back on set being Charity.

“It’s very interesting to see what they’re going to make her do next,” she said.

Charity started being an innocent and decent character up to when she had an affair with someone’s husband, John Maputla, played by Africa Tsoai in 2017. This produced a sour taste with viewers, to the extent that, Makgofe nearly got assaulted by women at a mall.

But she only laughed it off, saying it comes with the trade. “Our society is so patriarchal. It doesn’t seem to matter what the man does. Men get away with a lot,” she said.

She has been playing the character Charity for more than five years, and her mother is even now called ‘Mama Charity’ in the neighbourhood.

“I’m looking forward to the next storyline. Charity will be faced with the gift of prophecy. I can’t wait to execute it and viewers are going to love it,” she added.