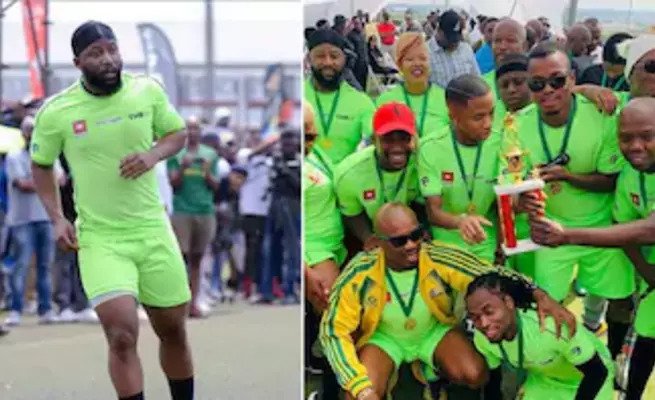 Cassper Nyovest knocked the socks off of the people of Mzansi when he showed off his mad soccer skills in a friendly Heritage Day soccer match.

The lit Mzansi star is a true inspiration when it comes to hustling to build your brand from nothing. Aside from his sharp tongue and drama-filled social media life, Cass is a phenomenal businessman.

A friendly Heritage Day soccer match, showing support in the fight against xenophobia, was held at the Nike Centre in Soweto yesterday where a team of Mzansi celebs took on a team of Mzansi soccer legends.

One Mzansi celeb who took the spotlight was none other than Mr Nyovest. Cass played his heart out and took on soccer legends like it was a piece of cake.

Cass even won man of the match!

Played some football with a cause today and with legs like these, ofcos i had to be voted "man of the match". Played my heart out and i had fun. #NY7 pic.twitter.com/SDNDIHxQSQ

Man of the match, believe me he is really good ,speed and the powerful shots he took 🔥,William Okpara had to work really hard 😀 pic.twitter.com/2EwJ2UAXHY

Bro, i was there watching. U played like a pro. We were shocked by ur skills and the quality of the goal you scored. U were not awarded the man of the match accolade by mistake. Bravo! 👊

@casspernyovest should have played FOOTBALL pic.twitter.com/4nc3U9hv2f