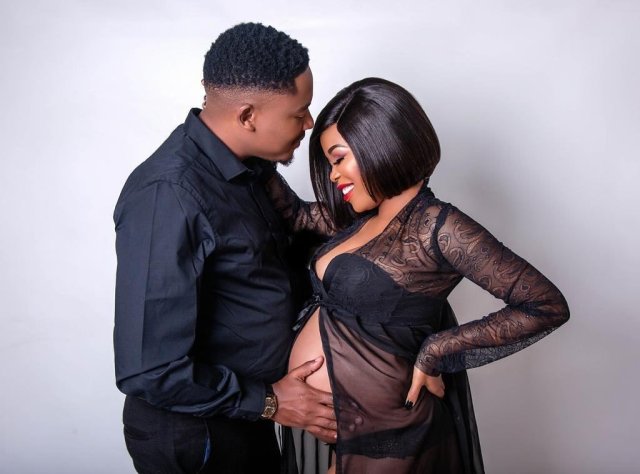 South African singer and TV presenter Mmatema Gavu is over the moon, the source of her excitement is that she is soon going to be a mom and can’t wait to grow her family.
She had been unwell of some sort, but the sickness was good news for her in that it confirmed something she’d been eagerly waiting for; she was pregnant.
Mmatema captured the hearts of millions of South Africans when she made grand entry onto the scene as a young vibrant 22-year-old Idols SA hopeful.
After she reached the finals, it opened some floodgates for her, she became a regular face on the local television screens. It is now four years after her sweet voice thrilled fans reminding them of Tina Turner, Adele and Whitney Houston as she sang their songs.

Mmatema is married to the love of her life, Tshepo Gavu, and the two are now expecting their first child.

“It is a boy,” the mom-to-be happily told Move.

Mmatema first let the news out to her thousands of fans on Instagram, with a photograph in which she’s wrapped in a lacy, transparent black top.

Her husband could be seen embracing her, with his hands testing on her bump while leaning in towards her, about to kiss her on the forehead.

She captioned it with her favourite Bible verse, Jeremiah 29:11, “For (only) He has good plans for us, plans to help us prosper and give us a great future.”

Since that official announcement of the pregnancy earlier this month congratulatory messages had been flooding her social media accounts.

Mmatema recalled the day she found out about her baby.

“I have never been so excited about being sick. The minute I threw up at the gym I rushed to get the (pregnancy) test, went to share the news with my husband and he was very emotional! He just held me and said, ‘Thank you, I love you.’

“We prayed, thanked God and called our families right away,” she told Move.

She found it so hard keeping the news away from their social media fans immediately, and she had to keep it as such.

“I married into a quiet, humble family. I had to respect their space,” Mmatema said.

However, despite keeping it a secret from fans they noticed it anyway, as she was still going to malls, gigs and public spaces.

“The feeling is unexplainable, because it is from within, but it just brings out so much joy,” she said.

Born in the Limpopo-province, the singer married in March this year in a private ceremony attended by politicians including Julius Malema and Mbuyiseni Ndlozi.

While the news of her pregnancy seemed to be a surprise for her social media fans, she and Tshepo had it well planned.

“Baby boy was definitely planned. I was ready,” she said; adding that before she met Tshepo she feared becoming a mother. “The thought of being pregnant always made me nervous. But that all changed when I saw how caring my husband was, how children just loved him.”

Mmatema who is now heavily pregnant said she and her husband would love to have twins next.

She said the pregnancy have changed many things in her life, but her appetite and taste on food has remained normal.

“I have no crazy cravings, thank goodness. However, if I see someone having something nice, I want it too,” she said.

For her, apart from having had gained some weight, it had been a Godly transformation.

“I’ve always known this, but pregnancy is a reminder that once again God is able to do above what you can imagine. He really has shown us grace and favour.

“My body has definitely changed but I’ve learnt to be in the moment and embrace every change,” she added.

The couple met in 2014 when they were part of a choir in Limpopo where they both hail from. They once attempted dating at that time, but it didn’t work out.

Tshepo who is also a music producer has had an impact on her music and career. Actually, her latest song, Make a Way, was produced by him. In 2015, after landing a runner-up spot on Idols SA, she returned to her normal life, and by chance, they met again.

Mmatema continues working hard in order to uplift her blossoming solo career as a singer, an actress and a presenter.

She joined the e.tv drama series Rhythm City early this year, where she plays the controversial character Valentine, the daughter of a very ambitious and fantasising domestic worker.

When she is not on Rhythm City, she will be presenting on Gospel Unplugged on SABC1.

She is working on her single Yahweh and is planning to release it next month.

“The thought of having a little human depend on you for absolutely everything is nerve-racking, and that’s why my faith is in God for wisdom, direction and strength.

“I thank God for my husband, his support, presence and love. It really makes life easy for me.

“I am most grateful for the presence of God in my life. He is the one in control of how my life turns out and I am grateful for that. God is faithful,” she said.

Mmatema proceeded; “God really has exceeded my expectations once again.

“He has indeed supplied all the needs I made the minute I found out.”