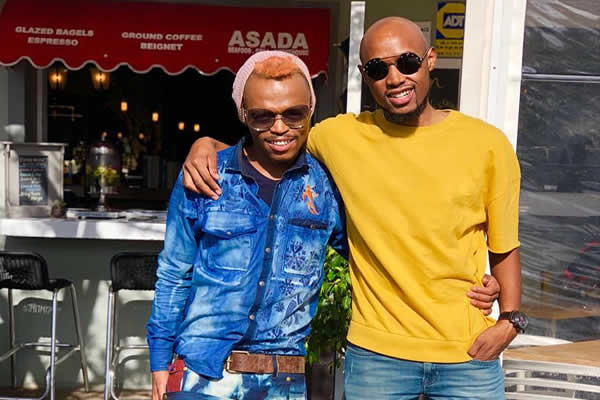 Mzansi’s most talked about gay couple is set to tie the knot soon in a traditional wedding ceremony to be held south of Johannesburg.

It is now confirmed! Mzansi’s favourite gay couple, Somizi Mhlongo (46) and his fiancé Mohale Motaung (23), will wed at Mohale parent’s home in two weeks’ time. According to City Press, the traditional ceremony that would see the couple exchanging the 'Yes I do' vows is going to take place on 28 September 2019, and will be attended by their families and close celebrity friends.
Their white wedding is planned for January 2020.

Six months ago, the Idols SA judge Somizi proposed to Motaung in an unusual way at the iconic Pont des Arts, commonly known as the love lock bridge in Paris, France. An excited but shy Mohale responded; “Yes!”


Sources privy to the goings on, said the invitation cards, had already been sent out. The cards were designed by Liquid Image Consulting, an event management company is owned by former SABC1 presenter Zandi Nhlapo.

Although the couple had been relatively silent regarding the date of their wedding, Somgaga in some instances hinted on social media that the two lovers were ready to walk down the aisle.
The couple who are set to tie the knot, met two years ago in Sandton and could not hide their excitement any more. Motaung recently tweeted: “#SoMohaletraditionalweddingloading.”
Somizi also hinted the of the approaching big day in their life, by confirming the guests list on Instagram.
The list included jazz artists Judith Sephuma, Brenda Mtambo, Vusi Nova and Prince Kaybee who are scheduled to perform at the traditional wedding ceremony.

“Somizi is a people’s person but he invited people who are close to him and people who have been there through his trials and tribulations,” said a happy guest, who requested not to be named.
The pair met at a book signing ceremony for Somizi’s best-selling memoir, Dominoes: Unbreakable Spirit, in Sandton in June 2017.

When the two lovebirds first came out to the open as a couple two years ago, fans were not convinced about their relationship, they claimed Motaung was a gold digger who was only interested in Somizi's money.
a
But, Somizi took a swipe against his fans he defended Motaung, saying given a chance, most of them (his fans) would not hesitate to take his place. He told the fans that he was old enough to know true love when he come across it.

“You never think that someone like him can love someone like me genuinely. You always place material gains in everything.

“And even if that was the reason, so what? Am I complaining? [You’re] busy saying he’s using me for money. Hayi suka niyakhathaza,” said a fuming Somizi then.

He added; “You don’t know how moody and cranky I become. You have never smelt my morning breath. Have you ever wondered why I was attracted to him in the first place?”

Their relationship had its highs and lows, at one time, it was alleged that the Motaungs didn’t approved of their son’s relationship, but the couple swam against the tide.
Late last year, Somizi met the family for the first time, and they accepted him. Following the meeting he excitedly posted on his Instagram.

“My in-laws. It was worth it to get here. Thanks to the Motaung family for such a warm welcome and love. Now let the wedding planning begin. I’m so happy. This is priceless,” he wrote.
Two months ago, Motaung said they were open to adoption but that he would love to have a biological child.

“We will adopt, yes. But I want a biological child, which I will make. Don’t ask me how,” he said.