Home Celeb Gossip UPDATE: Busiswa was beaten up after she was caught pants down having...

The singer and her friend Marc allegedly fell victim to more male violence amid what has been described as an epidemic of femicide in SA.

South Africans were outraged on Saturday on Twitter amid reports that popular singer and poet Busiswa Gqulu, known artistically only as Busiswa or Busi, fell victim to a beating from an ex-boyfriend and his friend, while Busiswa’s friend was also allegedly attacked.

Rapper friend Marc uploaded footage of his beaten-up face and damaged car following the alleged incident, and called for action to take place.

Watch his video below:

The ex has since threatened Busi that if she goes forward with this whole matter he will release sensitive information about her. Please help me find someone who can help. pic.twitter.com/OsY77ZYp7X

No one missed the timing of this news, since it broke amid a week of outrage against the abuse and murder of women in South Africa, and while slain UCT student Uyinene Mrwetyana was being buried in East London.

Busiswa, Marc said, has a child with her alleged attacker, whom he named, with a growing wave of calls for him to be arrested and prosecuted.

Marc explained in a Twitter thread that the ex-boyfriend had threatened Busi that if she went forward with the matter he would allegedly release sensitive information about her.

“Please help me find someone who can help,” said Marc.

In a Twitter thread he relayed the details of what allegedly occurred.

“So guys today… I was attacked by Busiswa’s ex-boyfriend and baby daddy. This morning for the first time she was opening up about her abusive baby daddy. As we were having this discussion in her apartment … the guy managed to somehow get in, and he found me in the apartment with her and started attacking me.

“I tried to escape but he kept trying to grab me … along with his friend. At this point I am calling out for help and nobody is responding … so I rush outside while his friend is chasing me.

“His friend catches up with me and grabs me by the belt … as he attempts to beat me up … I am trying to call out for help while I’m blocking his punches. At that point they were arguing about who’s fetching the gun to shoot me.

“While this is happening outside, [the ex] is physically beating Busiswa in the parking lot while I’m fighting off the friend. Then as I get closer to the security gate, [the ex] grabs a fire extinguisher and starts smashing my car windows and tries to break the door.

“At this time Busiswa has managed to get herself in the house … but now it’s two against one … and security still not assisting. Finally after calling for help multiple times the security comes out and I ask him to call the police. He then tries to stop the attack but is unsuccessful and calls for backup … some how I manage to make it out side the complex but now I can’t run as it’s surrounded by a bush and the ex-boyfriend and friend have managed to knock my friend, who they found sleeping in the car, out.

“So they drive to the gate and tell the security to open. So they can attempt to shoot me. Somehow they get an exit code and they come for me. So I block as many punches and kicks as I can. Eventually they decide they’re going to fetch their gun and disappear.

“Security manages to put me in a secure location but Busi is in her apartment and scared. Finally the cops came and took statements. But I don’t fully trust the justice system,” said the rapper.

Busiswa, a singer-songwriter and poet from Mthatha, Eastern Cape, gained public recognition after featuring on DJ Zinhle’s song My Name Is after being discovered by Kalawa Jazmee’s CEO Oskido.

The Citizen is attempting to get comment from the police. Spokesperson Captain Kay Makhubele said he would respond with further details about the case once it became clearer.

Fast Forward, DJ Kaygee then took to Facebook to give his version of the story.

According to his Facebook report, the DJ says he had walked in on Busiswa having unprotected s.e.x on their bed with her rapper friend Marc. Furthermore, DJ Kaygee denied the allegations about him beating Busiswa. 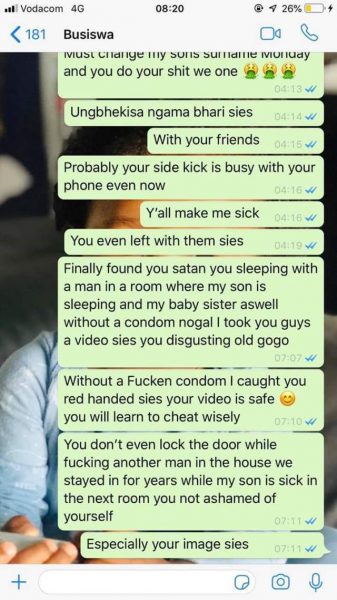