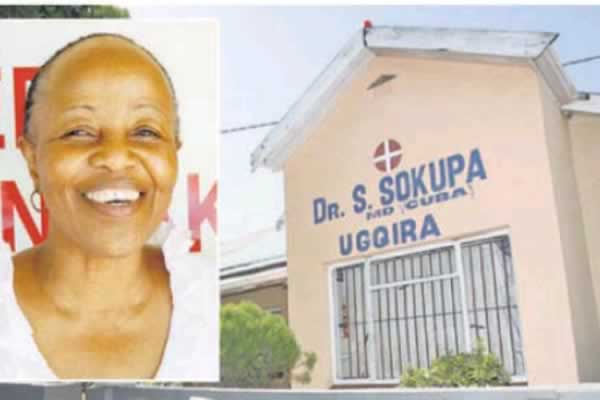 THE Hawks have swooped on Dr Siphokazi Sokupa, who was caught allegedly issuing fake sick notes to an undercover police officer – twice without examining him.

The elite crime-busting unit pounced on the notorious doctor, 67, and her assistant Cwaita Mngqibisa, 37, at the doctor’s practice in East London yesterday morning.

About eight patients waiting to see her watched in disbelief as the two were led to a Hawk’s vehicle outside. They were not handcuffed as they did not resist arrest.

Sokupa was heard talking to some of her patients who were turned away, telling them to stay put as she would be back soon. “This is nothing much, don’t worry. I’ll be back soon,” she said to an elderly woman.

Yesterday’s arrest was a culmination of an undercover sting operation where Sokupa allegedly dished out sick notes to a healthy undercover Hawks officer without examining him. The officer visited Sokupa’s rooms last week on Thursday and again on Tuesday. On both occasions, she allegedly issued a fraudulent medical certificate.

A probe commenced earlier this month after authorities were alerted to the pair’s alleged misconduct.

“Dr Sokupa allegedly issued sick certificates to an undercover agent with dates of his choice and without subjecting him to any medical examination,” Feni said.

The two appeared in the East London Magistrate’s Court shortly after their arrest. Magistrate Rochelle Sam released them on warning and postponed the matter to June 19. When the Dispatch drove past the premises at 3.30pm it was closed.

Eastern Cape Hawks acting head Major-General Zintle Mnonopi said they were committed to eradicating all cases of fraud in the province.

This is not Sokupa’s first brush with the law. She was arrested for the same offence before.

In 2010 the Dispatch exposed how the North End-based doctor and two other doctors were issuing fraudulent notes.

At the time, the health industry watchdog, the Health Professions Council of South Africa (HPCSA), said it was investigating the matter.

However, the outcome of that investigation is still unknown.

HPCSA communications manager Priscilla Sekhonyana asked for questions alleged to be e-mailed to her.

She acknowledged receiving the detailed questions as to the status of the 2010 HPCSA investigation and what the council was doing to curb fraudulent issuing of medical certificates more generally.

She promised to reply after “10 minutes” but her phone rang unanswered and she had not responded to follow-up messages by deadline yesterday.

● During the Dispatch investigation in 2010 – and again in 2013 – Sokupa issued sick notes to our undercover reporters without even seeing them.

On one occasion an undercover reporter was issued with a backdated sick note, which Sokupa gave after pleading with the reporter not to report her unscrupulous conduct to the media.

However, the 2010 cases against Sokupa were dismissed under mysterious circumstances.

Police and the National Prosecuting Authority could not say why she had walked scot-free. —

YESTERDAY the Hawks swooped on Dr Siphokazi Sokupa, who had allegedly dished out sick notes to an undercover police officer.

Sokupa, who has been exposed at least three times already by the Daily Dispatch for issuing fraudulent medical certificates, is just one of many unscrupulous con men and women masquerading as doctors.

How, despite being caught in the act, Sokupa is still practising “medicine” is beyond mind boggling.

The elite crime-busting police unit caught her red-handed during the undercover operations earlier this year. They arrested her and her assistant and alleged accomplice, Chwayita Mngqibisa. They are accused of backdating sick notes and issuing sick notes a week ahead to the undercover police officer. They were both released on warning and will be back in court on June 19.

The arrests must be applauded. Absenteeism has far-reaching implications, and not only for employers, but for the economy as well. When a large number of people are off sick, especially for fraudulent reasons, productivity decreases.

This has implications for the economy, something the Eastern Cape can ill afford.

They might think they are manipulating the system and being “clever” but the fun will end when they are fired.

Corruption is a two-way street. There is a corrupter and a corruptee. As long as there are people who will go to doctors with questionable ethics, unfortunately such doctors will continue to provide the service.

This is why everyone should play their part in ridding the industry of this unwanted and disgraceful behaviour.

Criminal cases alone will not solve the problem. Private companies, municipalities and government departments should all keep strict records of all unscrupulous doctors and not only not accept sick notes from them but report each attempt. There must be a database of such people. A doctor found guilty of misconduct by the health industry watchdog, the Health Professions Council of South Africa (HPCSA), can be slapped with a fine, suspended from practising medicine, or be completely removed from the register, which means he or she would never be able to practise as a doctor again, at least not legally.

The HPCSA should crack down on those that bring the profession into disrepute.

Fining a doctor for selling sick notes is a slap on the wrist at most. The dodgy doctors have to be severely punished for their unethical behaviour as they break the oath they took when they qualified as doctors.

Those caught should be blacklisted and prevented from ever practising medicine again.

They do not deserve to be called doctors – they have behaved like common criminals and should be treated as such.

The law, the HPCSA and employers must each play their part, whether in catching them or in dealing decisively with those caught and making an example of them.