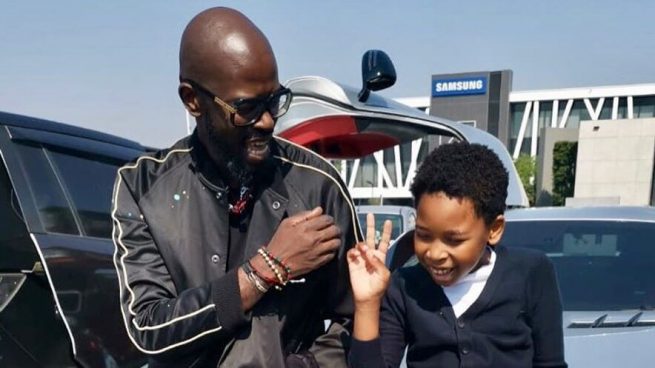 It was a dream come true for Anesu as he’s passionate about cars and wants to be a racing driver. Black Coffee was a special  guest and made it a boys’ day out by taking along his two sons – Anesu and 20-year-old Esona.

It was particularly exciting for Anesu to see his favourite racing driver Lewis Hamilton in action. They flew together as a family from Spain, where Black Coffee is having his Hï Ibiza residency.

“He’s been driving for almost four years now, he’s eight years old, he says he wants to be a driver, so hopefully he will follow through,” Black Coffee explained.

“He’s been so excited, I told him about the trip, I didn’t mention this trip, so I only told him two days ago, and that’s all he wanted to do. He didn’t even want to go to Spain, he wanted to come straight here, so he’s really excited to be here.”

Black Coffee added that he doesn’t mind his son having a career as a racing driver.

“I mean doing what I do, I love seeing that in him, I love him following whatever his passion is, I want all my kids to do that, of course school is important, but I’d really love for them to really follow through with what they want to do and I’ll give them any kind of support that I can,” he said.

It was also the first time that Black Coffee experienced F1 live. “What an amazing experience for me and my sons. My highlight was being in the McLaren garage and experiencing the pit stop, I even managed to record it on video, it was insane,” he gushed