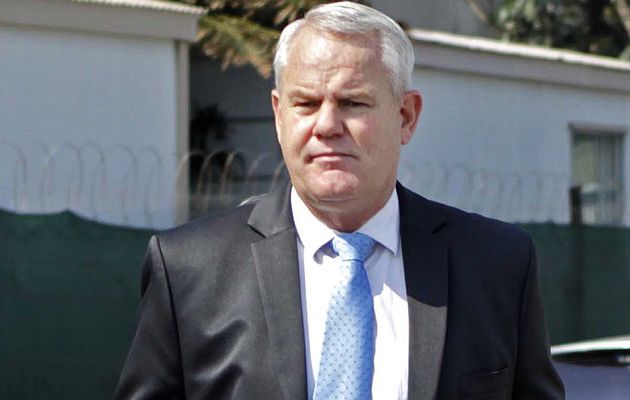 A hit has allegedly been taken out on the life of former KwaZulu-Natal Hawks boss Johan Booysen, and those behind it allegedly are none other than former president Jacob Zuma, KZN ANC provincial secretary Super Zuma, KZN MEC for economic development Sihle Zikalala, and former SAA chairperson Dudu Myeni. According to TimesLive, DA MP Dianne Kohler-Barnard made the claim during a debate on the police ministry budget on Tuesday afternoon.

The plotters had allegedly met with hitmen outside Durban, she reportedly said.

"There is confirmation from three independent and reliable sources that MK [Umkhonto weSizwe] veterans from Cornubia near Phoenix in KwaZulu-Natal have been taken on to do the job after meetings with none other than Jacob Zuma, Super Zuma and Sihle Zikalala. Dudu Myeni is also implicated after meetings with the vets. Indeed, if General Booysen so much as stubs his toe, we'll know where to look," she reportedly said.

Booysen told TimesLive that he was told by four independent sources that there was a hit on his life, but did not confirm that Zuma and the other politicians were behind it.

He said all his sources were "impeccable", and were independent of one another, moving in different circles.

"Last week I met a third source at my office and he told me that the same trio wanted to have me killed, and he was very concerned. On the same day, another source of mine in Mpumalanga told me he needed to see me urgently. I met him at the airport and he revealed the exact same story.

"Normally when it comes from one place you need to be careful, but this has come from four sources, each independent of each other. I have not yet taken this to the police [because] I don't want to expose my contacts. I am watching my back," said Booysen.

Booysen took early retirement in November last year, according to News24. This followed a long battle with the police over allegations that he and other officers were operating a "death squad". He was criminally charged in 2012 and despite winning successive cases, the charges were reinstated by National Director of Public Prosecutions Shaun Abrahams in 2015. Booysen is still challenging the reinstatement of the charges. He was also cleared of wrongdoing by an internal police inquiry.

He has always alleged that he was the victim of a political conspiracy because he pursued politically sensitive cases. This was reportedly confirmed by the police inquiry.

In March, it was reported by the Sunday Tribune that Booysen has been appointed as police minister Bheki Cele's advisor. Neither of the men confirmed this. However, Booysen reportedly said he would always be available to "serve" his country.