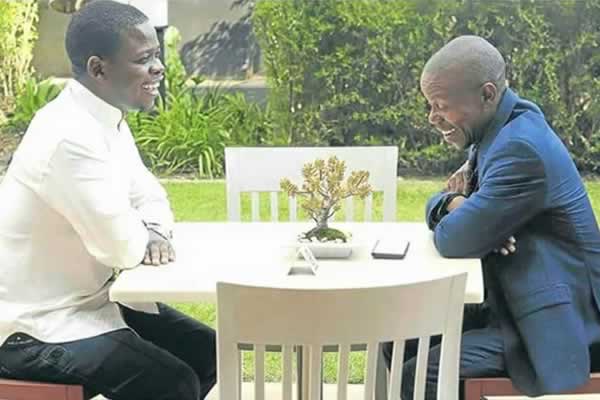 You now when they say to love a person is to accept their baggage? Well Prophet Mboro knows that for a fact because he says his recent reconciliation with Prophet Bushiri has apparently been him a "target".

It hasn't been a week since the two men of God reconciled, but Mboro has apparently since had to put out fires after old fake news stories made its way back into the spotlight.

A video from 2014 of Mboro praying over his congregation's sexual illnesses with their underwear in their hands went viral again this week.

"I am just going to say there's no way in hell I would ever ask a man, woman or child to be naked in the church and lift up their underwear. Those (fake stories) people were wrong and that video is old. They (congregants) brought clean underwear from their houses."

Prophet Shepherd Bushiri and Mboro recently revealed to SowetanLive that they buried the hatchet after being "sworn" enemies for years.

Speaking to TshisaLIVE, pastor Mboro explained that he'd become accustomed to the devil trying to stop him at every turn.

He said part of his #Mboro50 mission was to bring to the body of Christ and he was not surprised that just hours after reports of his reconciliation with Prophet Bushiri, there was "an attack on his reputation." Again.

"They are no longer attacking me. I am not being attacked here. They are the enemies of Prophet Bushiri who are not happy."

Mboro and Bushiri sorted out their differences and after exchanging apologies, let by-gones be by-gones.

Mboro said he knew that people would try to take him and Bushiri down.

He said people were not happy with their newly formed friendship and would stop at nothing to tarnish their names.

"Remember, when you support someone with enemies, his enemies become your enemies. Unfortunately, some of these people are the so-called men of God. they are using their people create these things so that when people want to find new church then they'll say 'here's a real prophet'. It's all for PR but it's not good for the church."

However, Mboro said he would not be swayed from his mission of preaching peace in the church of Christ, no matter what was thrown his way.

"They will not win. I don't regret reconciling and standing by Prophet Bushiri. He apologised for the things that were done in his name and right in the storm that he's going through, as a man of God, I'm standing with him."