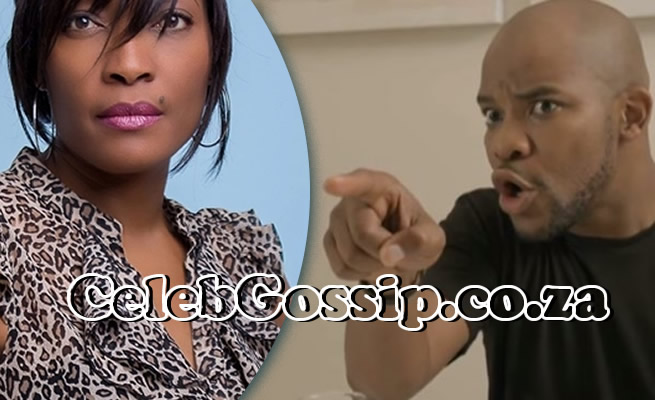 Social media is slowly becoming a big thing, when news filtered that some employers, were now checking applicants' social media platforms it sounded utopian. As weird the news would be, the medium is shaping lives, providing windows for venting sentiments, and exposing secrets.

That rings true for actor Hlomla Dandala’s social media open up accusing his wife of cheating on him, a move which has since exposed his family affairs, and how his marriage is in the woods. He later deleted the tweet, but the damage had already been done.

In 2018 Hlomla (44) and Brendah Nyakudya-Dandala (43), born and bred in Zimbabwe, were love birds painting a photograph of a perfect couple, whom the jealous ones would die of envy. They painted an ideal picture of a happy family, but a year down the line, the opposite is now true.

Their unexpected break-up has since taken family and friends, in shock and total disbelief- alleges sources privy to the family's internal affairs.
“He also has his own flaws and Brendah has forgiven him before,” one source close to the family tells City Press.

Hlomla who is known for his belief in communication as the only and best way to iron out differences so as to find a workable solution, seems to have failed to apply it in order to save his marriage.

It is reported that at one time, the couple’s families tried to mediate, with “Brendah’s family coming all the way from Zimbabwe, that has not helped much as the two just broke up despite all the efforts from the two families.

Another close friend of the family told the local publication that the former ‘All You Need is Love' anchor has lost the trust in his wife. He reveals that Hlomla opened up to them that he felt deceived as the man she allegedly bedded was someone close, who had come into his home as if in good faith. And as such, Hlomla felt as if stabbed in the back by someone who has pretended to embrace him as a friend.

“Who wouldn’t feel betrayed? I really don’t blame him. It’s just that he had grown. This relationship made him a responsible man. He was there for her. After your wife allegedly cheats on you there is no other way but to let her go. His ego is bruised because they were happy. He didn’t see this one coming. I think it’s a very sensitive matter to talk about. It’s something you can’t even ask people about,” another insider close to Hlomla, tells the publication.

Hlomla rose to stardom when he starred in SABC3's Isidingo in 1998, as mine manager Derek Nyathi. This is his second marriage, before this, he was married to actress Candy Litchfield, before they filed for divorce in 2013. With some reports saying they have been living separately since 2007.

City Press reports that he had fathered three children out of wedlock with former Miss City Press Nkele Motsomi, air hostess Sisanda Gqirana and Brendah, while he was married to Candy.

Hlomla admitted to News24 that his marriage had broken down, but said his fathering of children outside marriage was not the reason why he and Brendan broke up. He also refuted the claims that he fathered children with other women while still married to Candy.

“When I fathered my children, we had already separated. It is false that I fathered the children while I was with (Candida) Candy,” he once said in a statement.
He denied that his own cheating with different women has resulted in divorces, with Candy and Brendah.

Asked why he broke up with Brendah, Hlomla could not divulge any information, but instead, chose to be diplomatic only saying it was because of the two failing to find common ground. However, his tweets accusing his wife of cheating on him, had already given a clue as to why they broke up.

In November 2018 Hlomla and Candy were spotted at a wedding anniversary of Shona and Connie Ferguson but according to a source who attended the same event, they seemed not to be getting back together.

Apparently, the two are not willing to talk to the media about the separation. When City Press sought a comment from Hlomla, he refused; “I don’t want to talk about that,” he said before hanging up, Brendah could not respond to calls and messages sent to her.

Meanwhile, reports reaching DRUM are that the couple have entered into a pact that bars them from discussing issues that could tarnish each other’s image. Probably, this could have been crafted as a result from Hlomla’s recent slur on social media.

In a thread of tweets the actor posted images, of the man he alleges to the one sleeping with his wife.

“When a man enters your house, gets intimate with your wife while your children are IN THE HOUSE knowing full well that you are the husband, and then publicised their pictures on social media for the world to see, what is meant to happen?” reads one of his tweets.

Hlomla went on, tagging the guy, much to the displeasure of some of his followers on the microblog, who is was not a good idea for him to wash his wife's dirty linen in public.

Some telling him that what goes around comes around, and that revenge is sour, as such they believe he should not be a cry-baby, as according to them, it was pay back time for him.

He regretted having had bottled up the hurt for a long, until he could not bear it anymore, and it burst up the way it did.

Their friend disclosed to City Press that Brendah has moved to Dainfern, north of Johannesburg, while Hlomla stays in their marital home in Observatory, both trying to nurse the wounds of separation. Something not very easy for them, especially taking into account they had built a home together hoping to live together happily ever after.