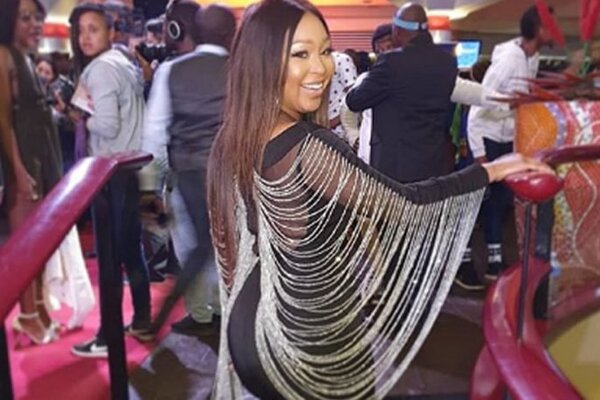 A Twitter user has come under fire for suggesting that Minnie Dlamini’s husband, Quinton Jones, will leave her because she is gaining too much weight

The man accused Minnie of letting herself go since becoming Mrs Jones in 2017.

“Why do woman stop taking care of themselves after being married.

“This one she is getting fat every day. Look at her face and chin. Mr Jones will start searching!!”

“The fact that people are sooo comfortable behind their phones to be so mean to a person who has done nothing to you but live her life and go through changes as a woman because it’s rare to be the same size you were at 21,” one woman wrote.

The fact that people are sooo comfortable behind their phones to be so mean to a person who has done nothing to you but live her life and go through changes as a woman because it's rare to be the same size you were at 21. pic.twitter.com/XVtI13utNG

Another user told the man that cheating has nothing to do with how a woman looks.

“If a man wants to cheat, he will do it regardless! A flat stomach, sexy body cannot stop him. U can’t leave some1 just cos they r fat. She can lose weight at any time she wants to, she has all the money to do so. She’s Happy with her weight gain and so is her husband,” she wrote.

Some have even asked if she was pregnant due to her fuller figure.

While Minnie has joked that she is “just fat” when responding to some of the queries, she hit out at people who asked her if she is with child.

“Let’s trust in God’s timing for the arrival of my offspring. We also need to be cognizant of how insensitive it is to speculate about pregnancy. You don’t know my journey or what I’ve been through or go through. Let’s just think before we tweet please,” she wrote on Twitter in February.