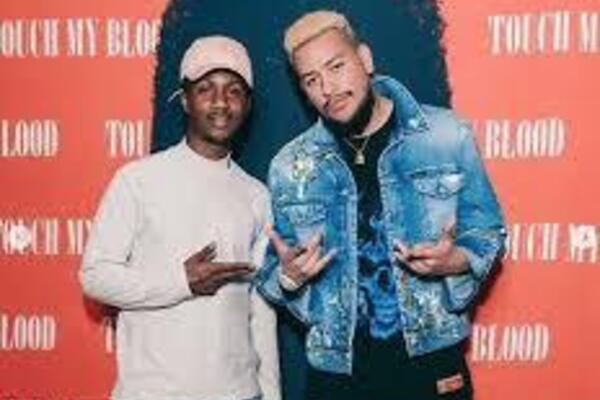 Rapper AKA's big brother mode was on 100 on Wednesday when what was supposed to be an innocent Q&A session between fans and Emtee turned into an ambush of insulting questions. He jumped to Emtee's defence.

Emtee has had many of these social media Q&A sessions across different platforms. He has explained that he does this so his real fans get a chance to hear his thoughts on whatever they wish to know about him. However, on Wednesday, the Q&A a mocking session. W even saw the rapper announce a break from Twitter.

"I’m dropping a song in a week or 2. Not tweeting till then. Peace," Emtee tweeted.

AKA and Emtee have always had a solid relationship and Emtee has mentioned several times that he looks up to the Touch My Blood musician. So when AKA kept getting tagged and realised it was because people kept asking Emtee if he would agree to be signed under AKA, he felt the need to step in.

AKA shut down tweeps for treating Emtee like a child who is incapable of making his own decisions. He said enough was enough, Emtee is a father of two after all.

"Y’all need to stop treating this man with kids like he’s a child. Enough," he said.

After Supa Mega tweeted, other tweeps started calling each other out for being mean to the rapper.

See their tweets below.

This #AskEmtee hashtag is mean
I don't see & could never understand how anyone's downfall can be a joke!
Maybe I'm just being hypersensitive because i know what it is like to lose all that you had & start all over.
I doubt i needed that experience 2 make me hate the posts i see pic.twitter.com/IOAy0RO8NX