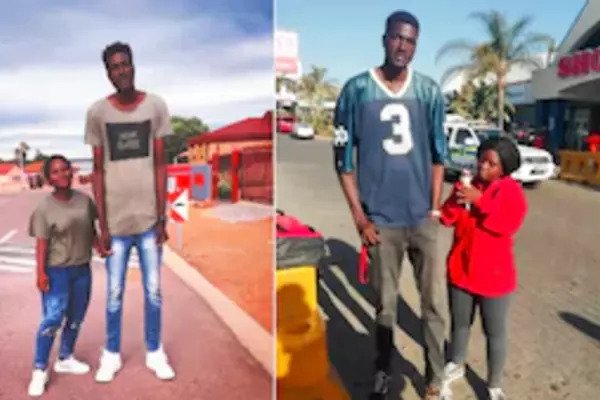 – A local man’s romantic birthday post to his girlfriend has gone viral due to the exceptional height difference between him and his bae
– The man, known as Beans, is 2.6 metres tall and towers over his tiny girlfriend
– Mzansi’s social media users were left with their mouths hanging open at the cutely incongruous couple and had many questions for the pair .

A local couple’s height difference has given many something to talk about, after the pair were spotted in a picture in a social media post. South African social media user, Beans, shared a picture of him and his girlfriend to celebrate her recent birthday, which subsequently went viral. Beans is 2.6 metres tall, while his partner is less than half his height. Seeing the two together in a picture left Mzansi in a state of disbelief.

Happy birthday my dear Girlfriend 😍😍🔐I Love you Baeb pic.twitter.com/YXQc1WNp2g

When u2 are fighting she'll be like 'wena giraffe' pic.twitter.com/Hnxs7bs3BW

I'd pay a lot of money just to see you and your girlfriend kissing 😂😂 pic.twitter.com/5ezR9YBzmH

You are no longer tall, you are long. 😂😂😂 pic.twitter.com/7mfqfNPp9W

But no one could deny that Beans and his lucky lady made a cute match!