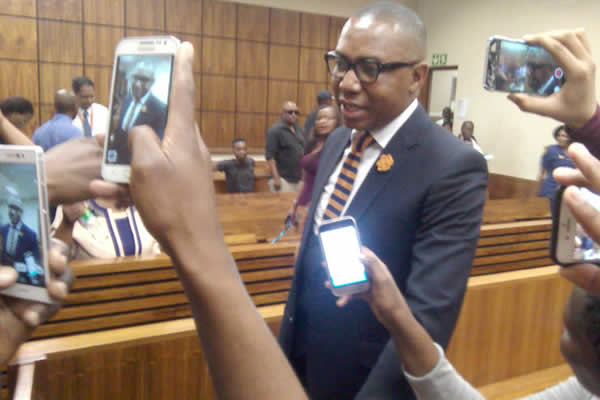 Mduduzi Manana allegedly offered his domestic worker R100,000 to drop the assault charges against him, saying "I’m willing to do anything" to make the case go away.

In a conversation recorded on Sunday night under a tree at the Douglasdale police station, where Christine Wiro had opened a case of assault against Manana, he can be heard speaking in a soft tone, begging Wiro to tell the station commander she was not pursuing the case anymore.

Contacted for comment, the former deputy education minister did not deny it was him talking in the recording, but he insisted it was audio of the family extorting him.

In the recording, Manana, speaking in English and Zulu, is heard saying he is “willing to do anything” to resolve the situation. Manana is talking to Wiro’s friend, who has asked not to be named.

Manana says: “I’m willing to do anything … Understand the situation."

“That does not end our relationship but it continues. That is the consolation I’m trying to get into. Look mama, I know that you worked just for two weeks but I am willing, just for humiliation, to give that consolation. Then we can still continue with our relationship.”

After he said this, Wiro’s son, Mpho, appears and the family friend starts to speak to him.

“You know what, at the end of the day it is up to you and your mom because it is something that will help you in your life. It has to come from you,” Wiro’s friend tells Mpho.

She then explains to Manana that the decision can’t be made by her: “They know their own situation, more than I could ever. That is why I am saying that.”

The recording ends there.

Contacted for comment, Manana said the audio clip was of Wiro extorting R100,000 from him.

“This is after they said to me ‘what are you going to do for us?’ So I said, ‘well, I am willing but let us ensure that this case is done away with’. But they proposed the amount and I said ‘fine, I will offer that,” said Manana.

“They even made me to sign a letter to say, actually, I am committing that I will give them the money, but I felt that this is extortion in the main. The recording is what they recorded when I was speaking, affirming what they had proposed to me. Mpho [the son] is the one who proposed … “Mpho said to me, ‘You must do something for us, my mother is sick, she is humiliated. You must give us R100,000.”

Manana accused the family of leaking the recording to suit their side of the story.

Asked if he had proof that the family asked for the payment, Manana said he had witnesses to back him up.

“I felt that it’s extortion, actually, I am being extorted, my past situation is being used to manipulate the whole situation,” he said.

Asked why he did not immediately open the extortion case, Manana said: “I was hospitalised yesterday [Monday] because I had to undergo a procedure and today [Tuesday], officially then, I will lay a case.”

Asked why, as an experienced lawmaker, he didn’t bring the police in on the extortion attempts, he said: “This was done at three o’clock, and I am saying I was due to be in hospital at six for a procedure.”

“Now I am being discharged, I am now going to lay [a charge] because I had to consult my lawyers first and seek advice from them,” he said.

TimesLIVE could not immediately reach Wiro or her son.

Wiro told TimesLIVE on Sunday she opened a case of assault and crimen injuria against Manana after they pair had an argument and she claimed that he pushed her down the stairs. She then quit and went directly to the police to open a case against him.

A TimesLIVE reporter later witnessed Manana negotiating with Wiro under a tree outside the police station. A few hours later, police said the case had been withdrawn.

Manana, in a statement on Monday evening, said he would open a case of extortion against Wiro because she tried to blackmail him.