Zodwa Wabantu set tongues wagging when she arrived at the Vodacom Durban July on Saturday in a sheer, crystal-encrusted dress that left little to the imagination. 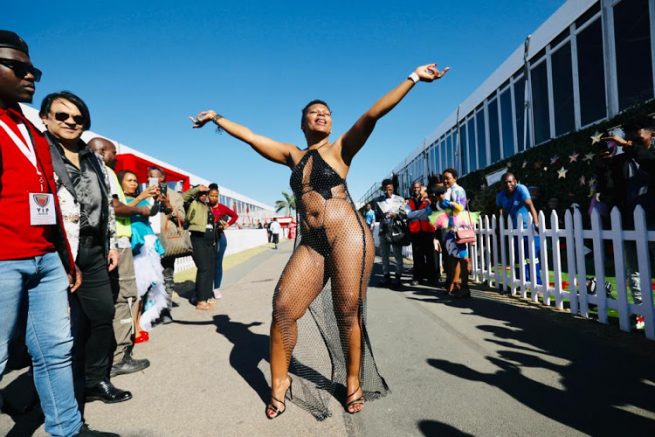 Zodwa, who recently had a non-surgical breast lift – was accompanied by her aesthetic doctor Mahendra Premchand, who performed the procedure on her.

"My breasts were sagging. I went the non-surgical route because I didn’t want to go under the knife."

Zodwa – renowned for her barely-there outfits and reality show Zodwa Uncensored, told TshisaLIVE that her dress was adorned with over 4,000 crystals.

"Look they are not Swarovski, but I wanted to shine… so here I am."

Back to Back with my G Mine @mbaureloaded 🔥🔥❤️

Back to Back with my G Mine @mbaureloaded 🔥🔥❤️

Her doctor explained that he used a revolutionary new method, which involved using threads to lift the lax breasts.

"I’m natural. I don’t wear make-up, so I don’t take hours with make-up and hair that is usually required for events like these," said Zodwa.

Despite her risque outfit, Zodwa found herself being side-stepped when the flamboyant Somizi and his entourage made an appearance at the famous tent town.

Also spotted among the early-comers was Khanyi Mbau, resplendent in a white ensemble.