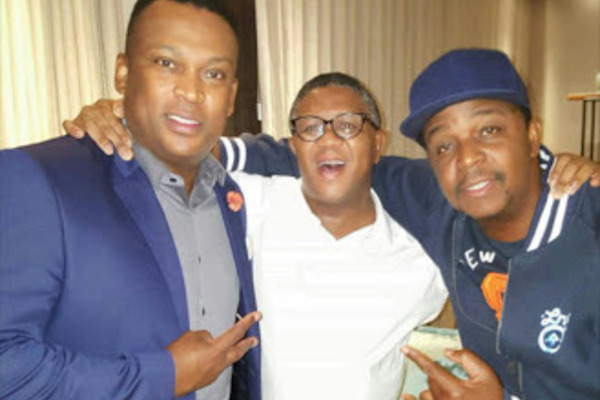 Robert Marawa and Fikile Mbalula are ‘on-and-off’ more often than most celebrity couples but after a video of the two sharing banter surfaced, it appears as if their friendship is back on again

Robert and Fikile may be two of the most prominent men in South Africa but they don’t always see eye to eye.

Just this February the two clashed on Twitter over the EFF’s decision to fly one of their planes over FNB Stadium during the Soweto Derby. Robert found the stunt entertaining, Fikile did not, and what followed was a childish (but amusing) exchange in which Julius Malema also got involved.

Those with a sharp memory will recall that this is not the first time the two have beefed, either. Back in 2017, things got so heated between the bigwigs that Oskido had to intervene and effectively force the gentlemen to shake hands and let their disagreements go.

And now, in mid-2019 it looks as if the on-and-off friends are back on good terms after we spotted them chatting casually at the recently concluded SONA address which took place on Thursday.

Robert Marawa, who was on reporting duty, interviewed the new transport minister and quizzed him on his new portfolio. Fikile spoke enthusiastically about plans to deliver a new bullet train and further advancements to South African rail.

You could see the affection between the two when the topic switched to #DataMustFall, as Fikile glowingly addressed the journalist as “Robbie” before they shared a joke. You could hardly tell that these two had ever had beef with each other.

Watch the bromantic video interview below:

Met the Minister of Transport for a brief summary of his short life in the new Portfolio!!

Can u deliver on the Bullet Train @MbalulaFikile #SONA2019 pic.twitter.com/EWr4bW6OId

The country (in fact, the world) just seems a much happier place when Robert and Fikile get along and you get the impression that, with the amount of wit and personality these two possess, we would have a lot more of this entertaining banter if they could avoid beefing for the next few months at least.

As a complete side note, what does one have to do to find someone who will look at me the way Fikile does at Robert in this video?

We met.
We spoke.
We resolved.
We shook hands.
Thank you @OskidoIBelieve for the intervention. Let's fight crime @MbalulaFikile 👊🚔 pic.twitter.com/s46Y9LUtxX