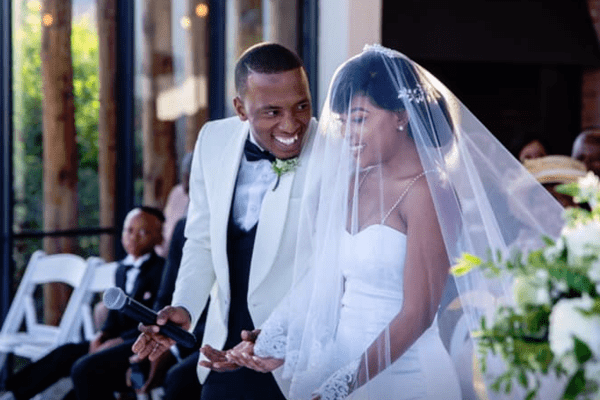 I’ve always known Dumi Mkokstad was up to something very fishy when he announced that his wedding was gonna hold on Saturday and secretly had it on Friday.

Yoooh!! The Mzansi’s young, charming and talented Gospel artist, Dumi Mkokstad recently had a lavish wedding in Kwazulu Natal. The events of the celebrations were very sketchy.

Mkokstad had previously misled the public about the day of his wedding and the wedding venue. A number of people were disappointed that they couldn’t celebrate his big day with him but still congratulated him.

Pictures of the wedding circulated the media and social media. Well, we had questioned if Mkokstad had any hidden skeletons in his closet.

To our surprise, BOOM, our gospel bae has more than just skeletons. If you do recall a video of him dancing with his girlfriend in matching outfits made circulations on social media late last year.

It turns out that the lady was indeed still dating Dumi Mkostad. The mystery lady’s name is Amanda Bhengu who was head over heels in love with the gospel musician. She only discovered after seeing pictures of him with his new wife on social media that the star was getting married. She expressed that upon seeing the pictures she thought he was shooting music video until such time that she was not able to get hold of him on the phone.

Ouch, as if that was not enough to label him a serial cheater. Mkokstad’s girlfriend of 3 years also mentioned how shattered she was on discovering that he is marrying another woman despite his promise of marriage to her.

The lady from Durban said that the beloved gospel musician was a wolf in a sheep’s skin. She mentioned that she does not believe that her lover of 3 years of whom she has been with through thick and thin has left her for someone else.
“I feel sorry for his wife as he will still mistreat her. The problem is that Dumi likes women whilst he doesn’t like using a condom. He has been changing different women through out our relationship, whenever, I would discover that he has started cheating he would apologise and promise on being a different person. He always comforted me by saying that I was the one he wanted to marry” she was quoted saying in Zulu.

She also said that she is in the know of the 21 year old lady that Isolozwe news paper wrote about late last year October. The paper alleged Mkokstad forced her to have an abortion. She said he does have a habit of impregnating women and forcing them to have abortions.

“I have also had numerous abortions as we are born again and we attend the same church. I always agreed because I did not want us to be in a humiliating situation at church by having a child out of wedlock. I did it to uphold his dignity. What makes me more angry is that I had wanted to leave him but he always begged me and now he dumped me like a hot potato. I don’t want anything involving him anymore.’ She further stated.

She said she does not know how to face her parents as both families know each other. On conclusion it came to light that she was not the only fooled by the young handsome gentleman.