R&B singer – Tellaman and iSthembiso actress, Nandi Mbatha have been rumoured to be dating for quite a while now; however, the two stars have neither confirmed nor denied that they are indeed an item.

This week, fans of Tellaman were more than convinced that the two are indeed dating after he posted a picture of the gorgeous actress with a caption that read: "I'm so glad."

ellaman is known to be quite a mysterious type of character who rarely posts anything outside of his private life, so when this picture of Nandi appeared on his Instagram page, people's assumptions went wild.

These are just some of the comments that were left on his Instagram page about the picture.

"All the diamonds and Gold don't mean nothing without you."…Now we know it was a dedication, the Whipped song take good care of her bro." 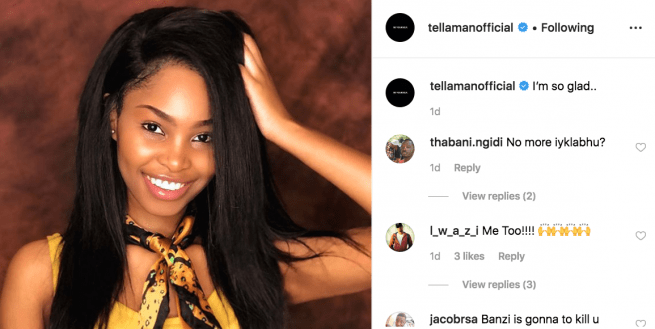 Tellaman has also left a few comments on Nandi's Instagram posts as well. The cutest comment we've seen from him was when commented on why he enjoys singing Whipped after Nandi posted a gorgeous picture of herself.

Although the two might not say it out loud, they are sure leaving a few hints here and there about how much they dig each other.

Will they ever entirely go public about their assumed relationship? Probably not, but it's cute to see their flirting moments on social media now and again.