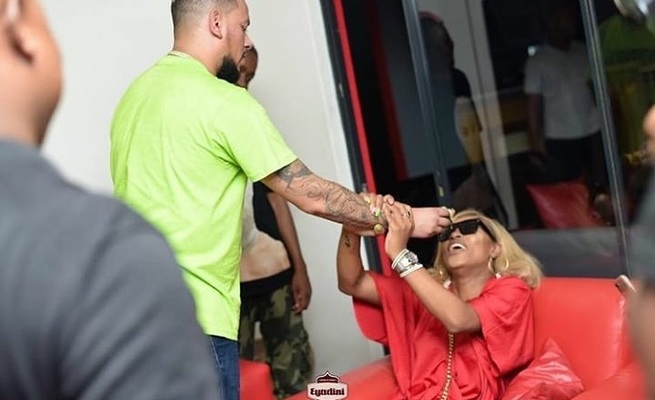 RAP star AKA allegedly attempted to bend the rules when he tried to sneak his drink past security guards. The Fela in Versace hitmaker apparently had a run-in with security guards at the 25th instalment of the South African Music Awards (Sama) announcement party held in Alberton, Jozi.

According to witnesses, the star tried to flout party rules. An informant claimed the star (31) tried to smuggle alcohol into the main venue.

“He got the shock of his life when security guards refused to put up with his nonsense,” claimed the informant. “AKA tried to push past security although he knew it wasn’t possible for him to walk into the main venue with a glass of alcohol.


“Anyhow, he tried to use his celebrity status to bend the rules.”

Another source claimed he insisted on being let in, as “it’s not like I’m going to kill someone”.

Insisted the source: “It was then that seven other security guards were called in to assist with AKA and his crew. He was told to step back because they [security] weren’t going to risk their jobs by bending the rules of the night, despite AKA being a celeb.”

Super Mega, as AKA is famously known, had to eventually swallow his pride, according to the third source.

“He had to follow the rules just like everyone else in attendance,” the mole said. “He finally gave in, as the event had already started when he was having his scuffle with the security guard. He was just trying to use his name to his benefit, but it didn’t work because he didn’t get the preferential treatment he expected.”

AKA was not available for comment this week. His PR manager Pumza Nohashe promised to respond to our enquiry. She had not done so at the time of going to print.