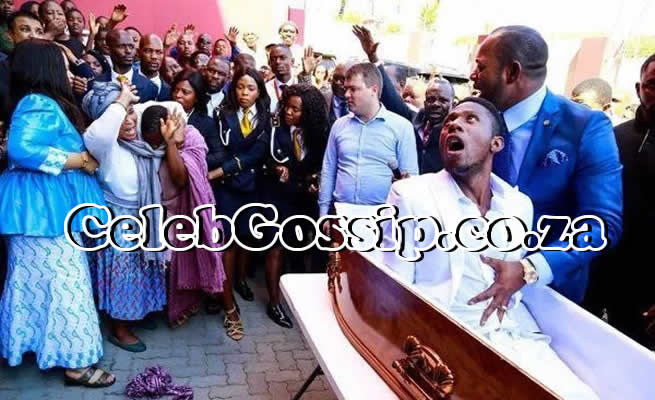 BRIGHTON “Elliot” Moyo might be buried in an unceremonious grave in Dandanda Village, Lupane, but the story of his “death”, “resurrection” and death again continues to grab headlines, as it has emerged that those that worked in conjunction with him to create that miracle are also Zimbabweans.

The man, who it eventually emerged was actually Thabiso Proud Mlanje, was allegedly resurrected from the dead by South African Pastor Alph Lukau in February at Alleluia Ministries Headquarters in Sandton, South Africa.

The events of that particular February afternoon, captured on camera, have sent shockwaves across both sides of the Limpopo, and set off a chain of events that continue to bring out more twists as authorities unravel a web of deceit allegedly woven by Prophet Lukau and those close to him at Alleluia Ministries.

For those involved in the events that led to that resurrection and, eventually, the very real death of Mlanje, their lives seem to have taken a turn for the worst. However, Prophet Lukau has denied raising the man from the dead, saying he was already back to life when he came to his church, albeit inside a coffin and hearse.

Among those that have come under the crosshairs in South Africa are two Zimbabweans, who were recently nabbed for their roles in the hoax. Nkululeko Dlamini (35) and Silungisani Grace Sibanda (40), appeared in the Johannesburg Magistrate’s Court recently where they face fraud charges in connection with the “resurrection video”.

The two are believed to have been the brains behind the operation to bring Elliot back to life, as they are alleged to have been in contact with a mortuary for the “dead” man to be delivered in a coffin to the pastor to “resurrect”. Kings and Queens Funeral Services, the funeral service provider who the two are alleged to have hoodwinked, have already come out and said that they were enlisted by the two Zimbabweans and another suspect that is yet to be named, under false pretences. The company also instituted legal proceedings against Alleluia Ministries.

“We were approached by alleged family members of the deceased who informed us they had encountered a dispute with a different funeral service provider and would like to use our transport services which we offered them. We did not supply the coffin, neither did we store the deceased at our mortuary and no paperwork was processed by Kings and Queens Funerals. As a Funeral Services Provider we do not offer services without documentation, neither do we repatriate bodies without any paperwork,” Kings and Queens said.

The prosecution of the two Zimbabweans at the Johannesburg Magistrate’s Court took a new twist however, as it emerged that Dlamini, like the now deceased “Elliot” also had two names.

“Prosecutor Mzamo Mathe told the court that the details contained in Dlamini’s Zimbabwean passport and his SA identity document were not the same. The facts on the accused’s ID are inconsistent with his SA ID.”

“We are trying to make sense of the documents. We are asking for a postponement to understand what we are dealing with because we have someone who is in possession of two names,” a court official said. The two Zimbabweans will appear again in court on 16 May.

Elliot and Dlamini’s case seems common for Zimbabweans in South Africa that want to earn living in that country without the requisite documents. For between R10 000 and R15 000 one can earn themselves a South African identity.

“We work with people from Home Affairs in South Africa. You just get a South African birth certificate and as the person at Home Affairs would already have been paid, you go through and get processed like a normal person looking for an ID. They take your fingerprints and everything and it’s a process that doesn’t even take five minutes. Your ID comes out two or three weeks later,” an anonymous source told Sunday Life.

SABC investigative programme Cutting Edge revealed how immigrants were easy targets for churches like Prophet Lukau’s Alleluia Ministries. Poverty stricken and in search of any work that might pay, Zimbabweans are now finding themselves prey to prophets that are desperate to sell a miracle to anyone willing to believe it.

“I really wanted to go and have the pastor pray for me and maybe I’d get a job,” said Samantha Revesai, a Zimbabwean mother of one who also came to the bright lights of Johannesburg in search of a better living.

“They gave me a paper. They were two of them (papers). The first one was written that I was positive (HIV). They already knew my name and surname so they went, I don’t know to which doctor, and the paper said I was positive. The second one said I was now negative (HIV).

“I was not positive. I have never been positive. They wanted me to act as if I was positive and then pastor prays for me and I would be healed and more people would come to the church. They promised me money. They said they would give me R1 500 every month.”