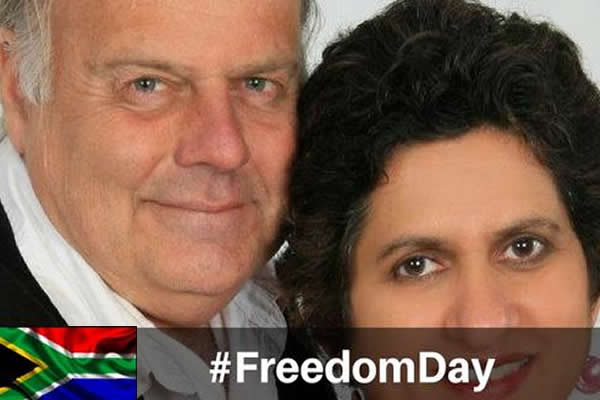 They met in the early eighties. Joubert Malherbe and Fazila worked for a left-wing newspaper called the Rand Daily Mail, both as journalists.

Although Joubert and Fazila escaped prosecution for marrying illegally during the apartheid era by moving to England to save their marriage.
They had to sacrifice the life they could have had with family they had grown up with.

The father of three recalled leaving the country with his Indian wife, now 59, just a week after tying the knot in 1983.

“In 1983 we decided to get married. My wife comes from a Muslim background and I come from a Christian background. She phoned me to say “we are getting married in two hours time” so I went over to Laudium, an Indian suburb in Pretoria, where she was staying with her folks. It was only her mom, dad, brother, me and her at the wedding.

The 65-year-old said his parents did not approve of their relationship at all.

“A week later we left the country and went to England where we stayed until 1995. We worked for a newspaper there from 1986 to 1995 and when the changes back in South Africa happened, we all celebrated and came back,” he said.

“My parents were Afrikaans. They were very much against it and we didn't speak to each other for a very long time but to their credit they did a complete U-turn and excepted us and our sons before they died in 2010 and 2013 respectively.

In fact my wife was actually next to both their beds when they died,” he told Pretoria News.

Despite challenges the country is grappling with, Joubert said they were glad they came back to the new South Africa.

“Leaving the country back then, we gave up family, friends and so on. You lost a great deal of your career because for years you had to make a new start.