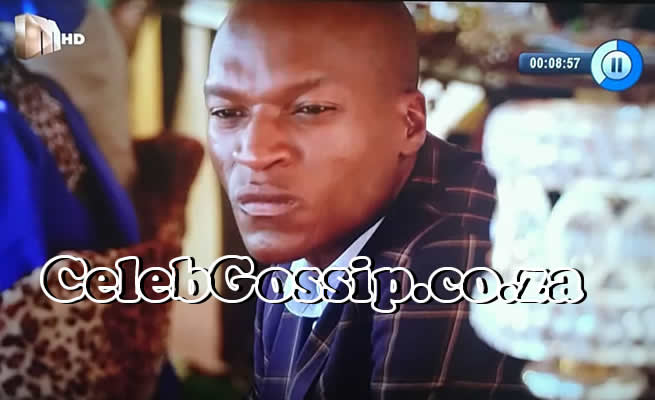 He achieved his dream of becoming a TV writer, then came the chance to be in front of the camera – and Chris Q Radebe hasn’t looked back.

He’s the royal bad boy who’s shaking things up – and not in a good way. The new chief of the Bhubesini Village and his good-for-nothing friends are trashing the royal household, seducing the servants and generally disgracing the chieftainship.

And it makes for riveting viewing. In fact, viewers can’t get enough of this racy storyline on Mzansi Magic’s Isibaya and of Dabula, the not-so-noble chief with a magnetic charm that makes him irresistible. Playing the dastardly Dabula is Chris Q Radebe and watching him delve ever deeper into the part week after week it’s hard to believe this is only his second screen role.

Acting wasn’t part of the plan, "The worst thing that can happen to you as an actor is when no one says anything about your character." Which is why he relishes playing the bad guy. "With nice guys, people will say something about them for the first few episodes and then they won’t say anything. But with Dabula, he confuses fans all the time. I love his unpredictability."

After undergoing strict training on how to conduct himself, Dabula was inaugurated as the chief of the sleepy village. While the elders are pleased they have a leader, no good can come of this. "He grew up as a small-time crook and was in jail. Now he finds himself in a position of power. Power to a person like that… it’s in the wrong hands because he’s angry about a lot of things," he says.

Chris is a household name now but success didn’t come easily for the KwaZulu-Natal- born actor. He and his three sisters, Ginephi, Zandile and Zethu, were raised by their single, unemployed mother, Tholani. Things were so desperate they didn’t have a home of their own and would stay with friends or relatives for a few months then move on again to someone else. Chris’ life changed in 1991 when his father, Shayizandla, came to fetch him and took him to live in Gauteng.

He’d thought his dad was dead but his father had actually remarried and was working as a miner. "I was six or seven years old when I moved to a mine property in Randfontein with him. That’s where I started to have a semblance of a proper childhood because we had our own home." Later, his sisters came to live with them too – but that’s when things began to go badly.

His father’s second marriage ended and he was often angry and took it out on his children. "He punished us by not caring if we had food or if we went to school. It was just horrible," Chris recalls. His mom died in 1995, when he was 11 years old. At school Chris dreamt of becoming a writer and was especially intrigued by writing for TV. "My biggest dream was to be a writer on Generations." After completing matric, Chris went to the SABC and asked to take a scriptwriter’s test.

He wrote one for Isidingo and passed. He was offered a job on the series but because he didn’t have a computer nothing much came of it. Now more determined than ever, Chris went to Durban where he got a job as a security guard, saving every cent he could for his own PC. Once he’d achieved his goal he returned to Joburg armed with his laptop and began writing his own scripts. His breakthrough came when he was drafted to write for a then-new show called Rhythm City. Since then his career has grown in leaps and bounds, with writing credits on Uzalo, Zabalaza, Isidingo, Isibaya, The Queen and The River.

His pivot into acting came by chance, when one of the Isithembiso writers said they were looking for some- one to play a small role on the show. Then Angus Gibson, one of the writers, approached Chris as he thought he had "an interesting face" that could be suitable for a new character they were working on for Isibaya. That turned out to be Dabula. Angus took a few photos of Chris and a few days later he was offered the part.

Having put in the hard work to make the transition to the front of the camera, Chris is now riding high. He may be getting praise for his role as Dabula but Chris still thinks of himself as a student of acting. "I don’t consider myself an actor just yet. I feel that would be disrespectful to actors who have spent years honing their craft.

When I walk in there I feel like these people are my teachers." While he may still be finding his feet as an actor, one area where he’s growing in leaps and bounds is as a tennis player. He often shows off his skills on social media and says he took up the sport after recovering from years of illness. Between 1996 and 2011 Chris couldn’t go more than two days without throwing up. He was eventually diagnosed with stomach ulcers and, once he was on medication and eating normally again, he decided to test the limits of his body by taking up tennis. "I suddenly had all this energy, and I said to myself, ‘I need to play a sport’."

He’s also a father figure in his home – he’s taken on the responsibility of raising his sisters’ children. His mother and his sisters have all passed away – as has his dad – but Chris is reluctant to share any more information about his family. While he loves the fatherhood role, he misses his sisters a lot, especially Ginephi, with whom he was closest. "She was like a mother to me," he says. "I remember the love I felt from her, the sacrifices she made, but I don’t remember doing a thing for her.

It makes me cry when I think about all the things she did for me and how I never had a chance to reciprocate." So is there a special woman in his life now – a queen for the man who plays a chief? "I’m not going to answer that," he says, grinning. "Maybe one day I will but not right now." I guess we have our answer already.