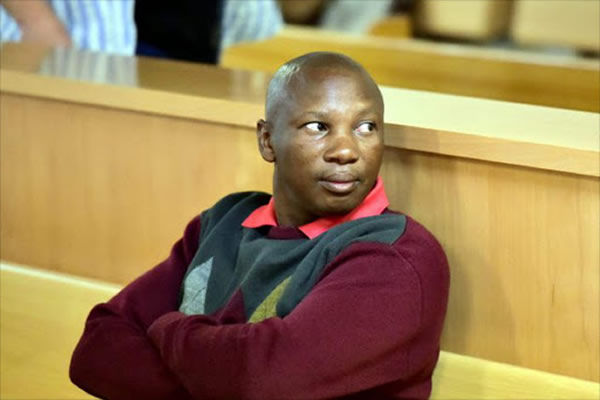 LACK of remorse and abuse of the community’s trust were factors in the decision to jail ANC Ward 20 councillor Bongo Nombiba for an effective five years yesterday. He has consequently now been disqualified as a councillor.

“What is clear [from the probation officer’s report] is that there is a clear lack of remorse,” Claassen said.

“While the ANC respects the right to appeal, it is saddened, at one level, to see an ANC public representative enmeshed in criminal activity and ending up in jail.”

But he said the sentence should serve as a warning to other public officials.

“There will be no place in the ANC for those who have been involved in corrupt activities.”

Nombiba’s attorney, Luthando Ngqakayi, was unable to say at this stage if they were planning to appeal against the sentence.

City manager Johann Mettler said Nombiba had now been disqualified as a councillor.

“I am not sure if there is any appeal, but regardless of this he will be reported to the IEC [Electoral Commission of SA],” he said.

Mettler said the IEC would then declare a vacancy and a by-election would be held within three months.

Nombiba was arrested by the Hawks in December 2016 and charged with one count of fraud, two counts of corruption and one count of contravening the Prevention of Organised Crime Act. He pleaded not guilty.

Nombiba facilitated a donation from the Ward 20 municipal discretionary fund for the Thulamangwane Community Project, a non-government organisation (NGO) caring for the elderly.

He then instructed members of the NGO to put their request for financial assistance in writNGO’s ing without saying how much they were asking for.

The completed and signed request dated September 15 2014 was directed to Nombiba in his capacity as ward councillor, and then redirected to then council chief whip Joy Seale.

Nombiba motivated the request for a donation of R30 000 and, on November 4, the funds were paid by the municipality into the NGO’s Standard Bank account.

He then asked two of the members to accompany him to the bank to confirm that the money had been deposited.

In passing judgment last month, Claassen said the state had proved that Nombiba had duped the NGO members into handing over R20 000 of the R30 000 paid into the NGO’s account.

He then deposited the money into his Absa account.

According to the evidence presented, Nombiba deposited R6 500 into his account within 14 minutes of the R7 000 withdrawal from the NGO’s account.

Claassen said Nombiba’s actions and testimony had made state witnesses out to be liars.

“You were in a position of trust and, yes, you abused that position.

“Clearly the only suitable sentence is a period of direct imprisonment,” he said.

“Fifteen years is the benchmark in these cases,” he said.

To send a strong message that the criminal justice system would not stand for public officials committing acts of fraud and money laundering, the only appropriate sentence in this case would be imprisonment.

During argument in mitigation of sentence, Ngqakayi said although Nombiba was not married nor did he have children, he supported his siblings and their children financially, as well as his parents and grandparents.

Nombiba earned a net salary of R40 166 a month as ward councillor.

State prosecutor Wilhelm de Villiers said the amount involved in the offence did not play as big a role as the seriousness and nature of the crime.

“He abused his position of trust in the community,” De Villiers said.

He said white-collar crime should be considered as serious as violent crime.

“He earns more than most people in Port Elizabeth and despite that he chose to commit this crime.”