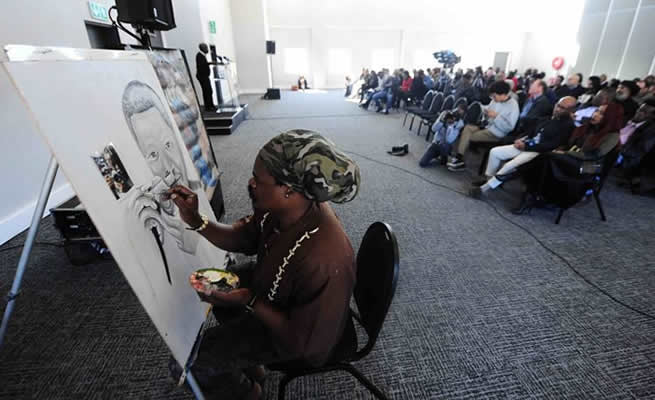 RASTA has once again made waves on social media.

But this time, it seems the artist has finally admitted he’s not very good.

Celebrity painter Lebani Sirenje, known to many as Rasta, posted a photo of himself at an event on Saturday, to which a Twitter user replied: “Was that a skhothani party? I can see how you are dressed.”

Rasta jokingly replied: “Your jokes are worse than my paintings.”

– After seeing the comment, many users said they were happy Rasta had finally admitted his paintings were bad. Nzotho wrote: “So are we going to ignore the fact that Rasta has admitted that his paintings are bad?”) Xhosa said: “So you know your paintings got a problem. Hook me up with your dealer.”) The real Tebogo wrote: “I don’t believe what I’m reading right now.”) Chelle Koali?: “I thought this was a parody account. I can’t believe I’m really seeing Rasta.”) Taka_lino: “Rasta, you must change the type of dagga you’re using.”

Rasta is known for portraits of celebs when they die. He has painted Winnie Madikizela-Mandela, ProKid, Akhumzi Jezile and HHP, but was criticised for not making paintings that look like his subjects.

In February, Rasta said he wanted to share his skills with up-and-coming artists at an arts academy.

“I’ve been drawing since high school and it’s my passion. “It’s what I live for What people don’t understand is painting is a process and is not a fast one,” he said at the time.