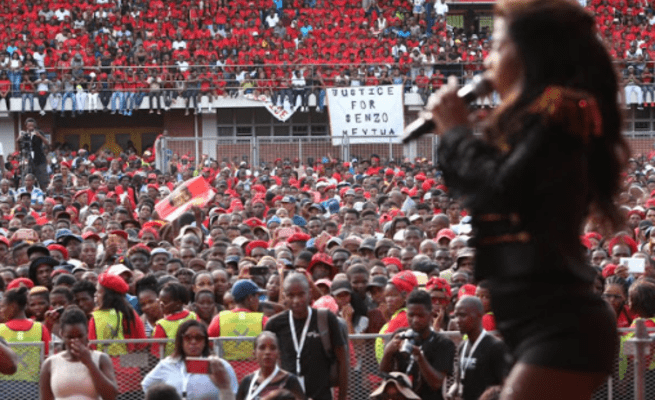 Kelly Khumalo performed at an EFF rally in Chatsworth Stadium in Durban over the weekend.

The singer only performed two songs and walked off after thousands of EFF supporters started chanting Senzo’s name and hung a banner saying “JUSTICE FOR SENZO MEYIWA”.

Annoyed, Kelly walked off stage and left the rally! Kelly and the late Senzo Meyiwa were in a relationship when the Bafana Bafana goalkeeper saw his death in October 2014.

A mysterious case that is yet still to be solved. However, Kelly did not face any charges regarding the unforeseen death of Senzo.

The star was excited prior to her performance, sharing on Instagram that “My Mama gave birth to a STAR”.

Only did she know it will all turn sour.

Kelly Khumalo performs at an EFF Rally in Chatsworth . She performed only two songs as the she was received by a crowd holding a banner “ justice for Senzo Meyiwa” @TimesLIVE #EFFKZNRALLY #KellyKhumalo pic.twitter.com/YZmkV2bE7I