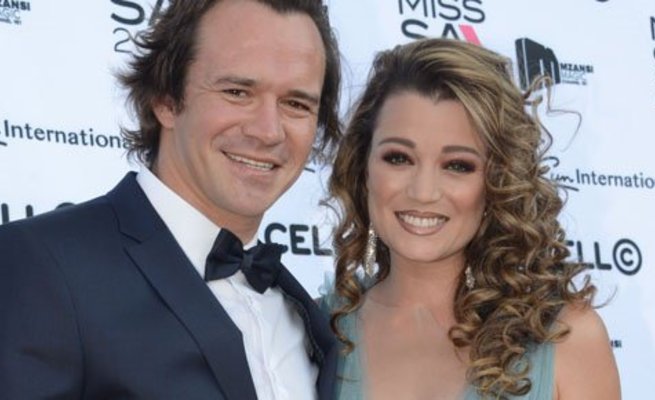 Cape Town – According to an article published in the 28 March edition of Huisgenoot, Afrikaans singer Nádine walked in on her boyfriend Derick Hougaard in bed with another woman in a hotel room in Pretoria on 16 March.

Speaking to the publication, Nádine confirmed that she confronted Derick and the other woman in the hotel room and that her heart was "beyond broken" following the incident.

The former rugby player told the publication that it was going to be extremely difficult to patch things up with his girlfriend of 20 months and said that he doubts there is any hope of saving their relationship.

He maintained that he did not cheat on Nádine, but admitted that he was heavily under the influence and couldn't remember much from that night.

Huisgenoot published photos of Derick and a blonde marketing assistant, who was not named, having drinks at the hotel bar earlier that night, as well as photos of the pair "caught" in the hotel room the following morning.

Derick and Nádine confirmed their relationship in February 2018 and made their first red carpet appearance together at the 2018 Miss South Africa pageant.

Derick and Karlien were embroiled in a social media spat earlier this year when Karlien made several allegations against her ex-husband, which included him being intoxicated while the children were under his care.

In an interview with Rapport, Derick admitted to having "too much to drink," but was adamant that his children were never in any danger.

Several attempts by Channel24 to obtain comment from Nádine has been unsuccessful.