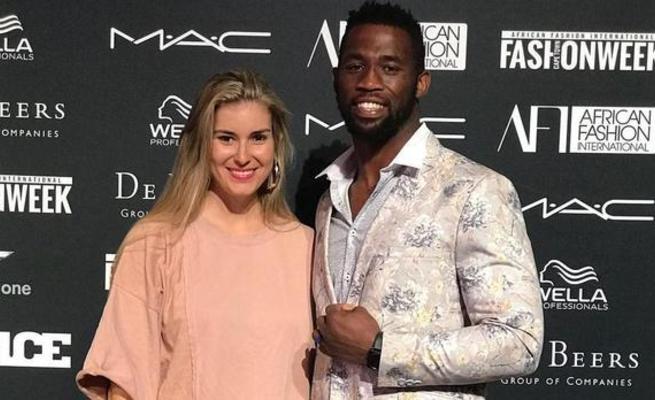 Rachel Kolisi made headlines on Monday, after sharing a video online in which she alleged that 23-year-old fitness model Marike Botha sent an explicit photo to her husband, Springbok captain Siya Kolisi on Instagram.

And like a woman scorned, the rugby misses took to her own socials shared Marike's personal information including her social media handles and the name and location of the gym she frequents.

According to Marike Botha's manager, Mr. Benade told Media 24 that his main concern is that his client's personal information has been made public online without her consent.


She has been violated. Our main concern at this stage is her well-being, which includes her privacy and safety. We have put in place safety precautions. We want to handle the situation professionally and correctly.

According to Mr Benade, Marike received a slew of "threatening messages" within minutes of Rachel's public post, but soon thereafter was overwhelmed by "messages of support."

Although Rachel later deactivated her account as pressure mounted against her‚ social media experts have warned that she could still face severe consequences.

By posting the image without the woman's consent‚ Rachel has in actual fact, infringed on the privacy of Ms. Botha‚ which could have serious civil and criminal common law implications, should she chose to bring this forward in a lawsuit.

Social media has definitely chimed in on their views on Rachel's involvement on the matter. Many calling her insecure (and have called her that due to another incident prior to this), while others believe its an act of cyber bullying. But no one really calls Siya out for his involvement.

Here are some of the tea that was spilt on Rachel's rouge tactics this past Monday, via socials:

If you're going through his phone, you've already lost the battle. This is the problem with relationships. Your partner breaks ur trust, u forgive but you can't seem to forget. #RachelKolisi

can #RachelKolisi please find a hobby. Poor girl’s embarrassing herself. Im an avid rugby fan and she’s ruining it for me, every time the boks run into the field I’m going to think: ‘hai shem, poor siya is the emotionally abused husband who now has to battle the All Blacks’

If #RachelKolisi sees this is what happens at the Springbok camp then…. pic.twitter.com/IYrmothZhW

#RachelKolisi the home wrecker in this marriage is Siya Kolisi…..the other girls don't owe you wives loyalty but if you married to a dog that your problem. indoda ayithathwa esihlahleni .it is not our responsibility to keep your man faithful.he should want to be faithful

This #Kolisi Captain thing is bigger than rugby!

What are your views? As usual its a mixed trail nuts bag of opinions on socials but until the situation is resolved or the hype around the issue has settled, do you think Rachel will be apologizing before things get legal? We will be sure to keep you posted.