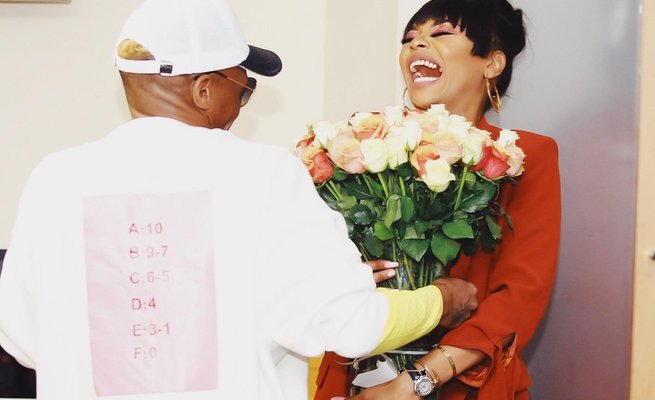 The on-again best friends have revealed the exact moment that they became friends again.

Bonang stopped by the ‘Fresh Breakfast Show’ on Tuesday morning to promote her new business venture, House of BNG.

Somizi, who co-hosts the Metro FM show, could not stop gushing about Queen B.

Somizi explained that they rekindled their friendship when they ended up working on a project together in Cape Town last year.

They both signed up to work on the Tropika Smoooth Fan set but were put in separate groups.

Bonang said that working with Somizi did not bother her at the time because she is not one to let her personal issues get in the way of her work.

Nonetheless, their paths eventually crossed while Somizi and his group were waiting in a slow lounge.

While some thought that the claws would come out, they hit it off almost immediately like nothing ever happened.

“She walked straight to me and said, ‘I missed you, friend’, and I said I missed you too and we kissed,” says Somizi.

Love is In the air @somizi and @bonang_m #freshbreakfast pic.twitter.com/gkniqW8T0T

When the interview cut for a break, Somizi rushed to his car to get a bouquet of flowers he bought Queen B.

“I’m happy… I really missed her. We missed each other. And life is too short to be holding grudges. I think we realised whatever separated us, there was nothing to it, nothing at all. It was just voices from outside influencing and saying he said this and she said this.

“But I am glad that we had the opportunity to fix our friendship, because truly, truly, truly we love each other,” Somizi told his Instagram followers in a live video.

SomGaga added that the separation was necessary for their friendship.

“Sometimes people need to be apart for them to realise how important they are to each other.”

Bonang and Somizi’s friendship ended around early 2016. He revealed in an interview that Queen B just stopped talking to him and he did not why.

Rumours were rife that Bonang’s then boyfriend, rapper AKA, allegedly blamed Somizi for telling DJ Zinhle about their affair.

But that is all water under the bridge now. Somizi was one of the VIP guests at the launch of Bonang’s Brut & Brut Rosé MCCs.

They were all smiles as they posed for pictures.

It seems that Bonang’s personal life and career are both doing well. Her sparkling wine, which retails for R399,99 sold out on Woolworths’ website within hours

@houseofbng MCC is currently sold out, but new stock is on the way. #HouseOfBNG @bonang_m 🍾 pic.twitter.com/e5TP4c6bj2