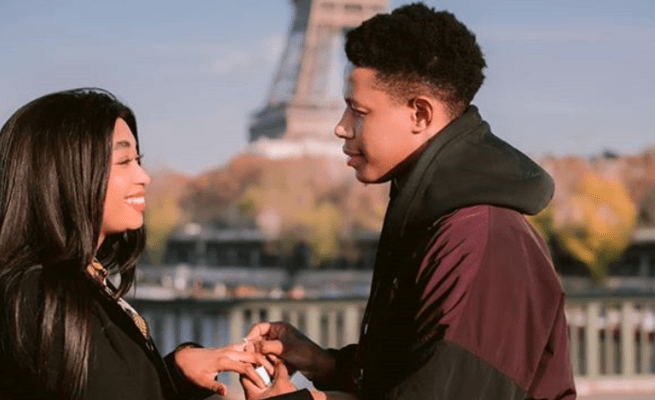 The Bafana Bafana athlete Bongani Zungu and his bae Khanyi Cele were once "couple goals" for some as these love birds were soon to get hitched after a grand proposal in Paris.

Now things have taken a dark turn for the dynamic duo as the couple has split and Bongani Zungu has allegedly asked for his lobola back for his then fiance.

The split was apparently amidst a cheating scandal on Bongani's side since then the two have reportedly split and have since went their separate ways.
Supposedly.

As amicable as that sounds, it really isn't, because Khanyi went on a drunken Instagram rant last night spilling all the tea on her ex.

Whuuu she is saying y’all must go take sex tapes with Bongani Zungu cause he is that easy…. relationships have y’all looking a mess. pic.twitter.com/oI8Vnlcobf

In the video, this young lady went on to say that she requests all women to go after him (Bonangi) as he's an easy target. She also requests that whoever goes after the soccer star, should record them having sex – as she isn't going to catch anything.

Needless to say, the video is a sloppy mess, as she continuously berates her ex for about a minute.

The twitter streets were of course not impressed by the video, here what some of black twitter had to say:

Why do people date soccer players and act so shocked when they get played ⚽?

They will get back together as usual. 😕 this relationship isn't going anywhere yet they keep on keeping on. Ngabe bayahlukana nje and do better things with their lives ei

Yikes I wish Khanyi didn’t do this 😭

We all know that social media and drinks don't mix and pans out to be a positive thing for anyone involved. Most suspect that the couple have been on and off for years- this scandal is no different. Do you agree?