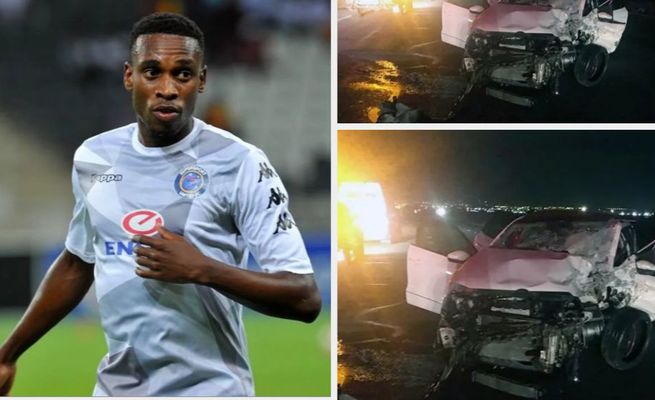 MXOLISI was driving home from Mbombela in the early hours of yesterday morning.

His team had played to a 1-1 draw against Kaizer Chiefs at Mbombela Stadium on Friday night.

The SuperSport United midfielder’s VW Polo TSi is a write-off after being involved in an accident on the Vosloorus, Ekurhuleni, off-ramp from the N3.

Two days after the match, Mxolisi, nursing wounds at Thelle Mogwerane Hospital, confirmed that he was in the accident.

“I was with my friend and my girlfriend,” the 30-year-old said this morning. “We can’t talk right now. Please can you call me tomorrow morning,” he said, before hanging up the phone.

Mxolisi helped his team to fifth place on the Absa Premiership log. He scored in the second minute of the match, scoring in the fourth game running.

He has been on great form since arriving at United on loan from Wits during the January transfer window.

He is believed to have been on his way home to Northcliff, Joburg. The Range Rover had apparently stopped on the side of the road inside the yellow line near Vosloorus. Its driver was apparently waiting to pick up a child who was going to Joburg.

The source says that Mxolisi was shocked.

Ekurhuleni EMS spokesman Vincent Khoza said they received a call about an accident at the Barry Marais off-ramp at about 3am yesterday morning.

“On arrival we found a white Polo and a blue Range Ranger involved in an accident.

“We took three male patients to Thelle Mogorene Hospital in Vosloorus in a stable condition.”

He said at about 7.30am yesterday morning a fire engine was sent to the scene and a female body was found.

Khoza said the police are investigating where the body may have come from and whether it was linked to the accident.

SuperSport United spokesman, Brian Moshoeshoe said he was not aware of the incident.

“Who told you that? I will definitely get back to you as soon as I get something,” he said.

Police spokesman Captain Piet Rossouw said: “An accident happened at about 2am in the morning and one women died at the scene.”

Rossouw said a case of culpable homicide was opened.