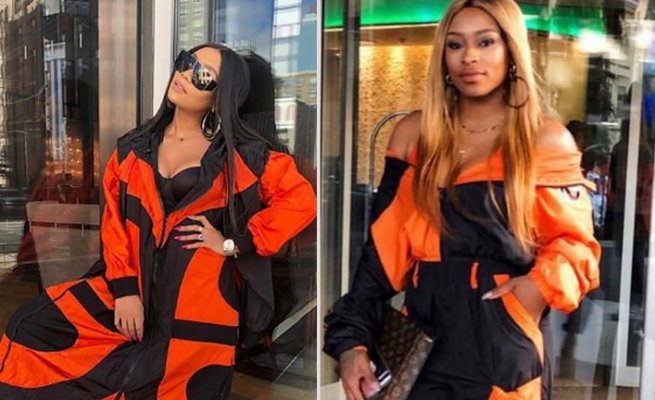 Bonang Matheba has access to some of the best designer clothes in the world, but has she been taking her style cues from DJ Zinhle?

Twitter users are convinced that Queen B has copied Z’s style thanks to a few outfits she rocked recently that caused some major déjà vu.

Bonang wore a black and orange Laurence & Chico outfit during a trip to New York earlier that looked very similar to an ensemble DJ Zinhle has been seen wearing.

“Even the [Versace] printed shirt look, Zee did it a long back before the look became a thing (tho she wasn’t in the actual versace back then lol). People always find her creative strange until they catch up few months & years down the line. She was fashion guru in her previous life,” one Twitter user wrote.

Even the versage printed shirt look, Zee did it a long back before the look became a thing (tho she wasn't in the actual versace back then lol)

Ppl always find her creative strange until they catch up few months & years down the line. She was fashion guru in her previous life pic.twitter.com/Pf7gahuC90

When I saw Bonang's pic, I was immediately taken back to when Zee rocked this outfit…but I wasn't gon' say anything until I came here and realised I wasn't alone in this😅 pic.twitter.com/7uCa33uRV8

Bonang was dressed by New York bases stylist, H.Diddy, during her recent trip to America and it is unlikely he has been keeping tabs on Zinhle.

It’s not the first time Queen B and Zee have been accused of copying each other.

Zinhle has been accused of drawing inspiration from Bonang in the style department.

The DJ’s love of all things fur apparently came from B, according to some Twitter users.

“Actually thought that was B for a second, the hairstyle, the shades, the pink fur. Girl what is you doing,” a Twitter user commented on a picture of Zinhle in 2018.

One of Zinhle’s fans hit back.

“Shades? Something Zee is known for – it even got her an ambassador deal. Fur? Which is not even pick? Something Zinhle been doing before it got in style? Weave? Cos Zee makes various weaves & bonang only straight weaves so straight ones are bonang’s look when Zee does it? Stop it guys.”

“This look is ALL @DJZinhle for sure,” one tweet wrote.

This look is ALL @DJZinhle for sure

What do you think? Are these two famous women copying each other’s style?

We doubt Zinhle and Bonang are keeping tabs on what the other is wearing.

The so-called similar looks are not identical and can easily be the result of trends both have picked up.

Either way they both are fashion goals.