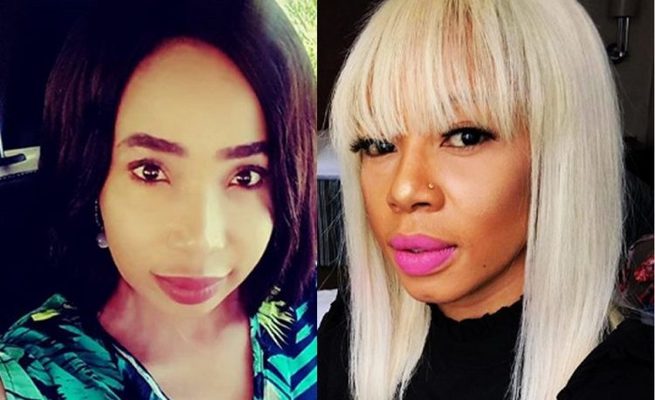 The kwaito star shared her views after Twitter users made offensive jokes about Kelly in the wake of the Mampintsha-Babes Wodumo abuse scandal.

Twitter users urged Kelly to date Mampintsha so that justice will be served.

Internet trolls have previously labelled Kelly the “Babe of death” or referred to her so-called curse.

The “Kelly curse” is in reference to Kelly alleged bad luck with past relations.

Her partner, soccer Senzo Meyiwa was shot dead, while her now ex, rapper Jub Jub, was jailed for his involvement in a deadly drag race.

This, haters believe, is enough proof of the “Kelly curse” – which will come in handy in dealing with Mampintsha.

“Kelly Khumalo is the only woman who can deal with Mampintsha,” one Twitter user wrote.

The Dance Comigo singer did not take find the tweets funny.

“I wonder what separates you cyber bullies from Mampintsha?” she tweeted.

I wonder what separates you Cyber bullies from Mampintsha? 🤔

Mshoza, who has been abused online as well, rushed to Kelly’s defence, telling the cyberbullies to back off

“I get it that you make fun of me and my skin conditions. But I will never understand the cyber bullying u put upon @KellyKhumaloZA via @BABESWODUMO assault. If we Mzansi ladies we can take off our heels & makeup, start walking the talk and si #banikelento & fight these abusers,” she tweeted.

Despite scores of Twitter users rallying behind Kelly, many continued, justifying their actions with claims that Kelly knows who killed Senzo Meyiwa.

The football star was shot dead at Kelly’s mother’s house in Vosloorus in October 2014 during an alleged botched robbery.

Some South Africans believe that there was no robbery and that Kelly knows who shot him. The singer denies the claims.

“I don’t care about how much Kelly Khumalo gets bullied on this app. She’ll never find peace until she tells us who killed Senzo Meyiwa,” one tweep wrote.

Another added: “I have no sympathy for Kelly Khumalo, she and everyone in that house aren’t telling the truth about the day Senzo died. Until then, may she never find inner peace.”