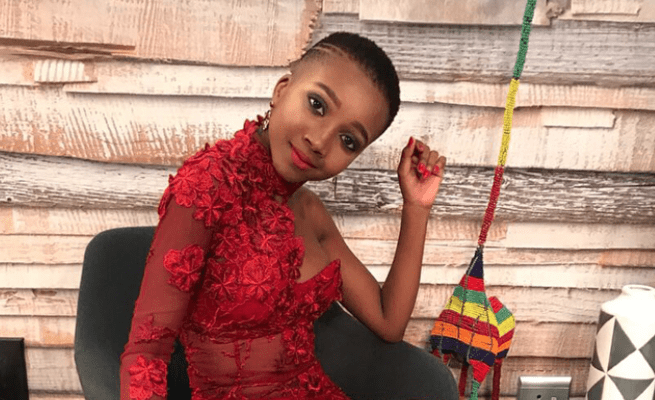 Kgomotso Christopher and Florence Masebe have come out to slam the social media bullies that have targeted young Scandal! actress Mvelo Makhanya over the size of her head.

The actresses, along with many other people have come out with encouraging messages for Mvelo, who broke down in one of her Insta stories earlier this week pleading with people to be kinder.

This after she was mocked for her "big head".


The veteran actresses came charging at the twelep, Daniel Marvel, whose tweet sparked the whole thing on Twitter.

The twelep has since offered a vague apology to "that Scandal! chick" saying that he understands that his tweet has hurt her and broken her self-esteem but tweeps didn't feel it was sincere enough.

I apologize to that scandal chick for making fun of her beautiful head… I wanna take u out as a point of saying sorry pic.twitter.com/4x1g0t7m0E

Her collegue Kgomotso was one of the first people to make her voice heard on Mvelo's behalf, telling cyber bullies to back off as she and her fellow actors on Scandal! will not tolerate any kind of bullying towards Mvelo.

She made it clear that as one of the people who have had to endure bullying because of her petite frame, she knew how it felt and would not allow people to do that to Mvelo on her watch.

Unacceptable. We won't tolerate bullying of fellow @etvScandal actors. I stand strongly on this. Having been criticized for my small frame years ago. "Talk about my work, my craft…the rest is insignificant." Strength & love to my beautiful, brilliant co-actor @_MveloMakhanya https://t.co/eA7hf1FOft

Florence also made sure that Mvelo knew that she had her back always and that she needed to rise above the petty hate because she's talented.

"Social media can be such a mean and ugly space. Mvelo Makhanya did not have to make a tearful plea for us to know that the cruel remarks about her were hurtful. It's wrong. We can do better," she said.

Social media can be such a mean and ugly space. @_MveloMakhanya did not have to make a tearful plea for us to know that the cruel remarks about her were hurtful. It's wrong. We can do better. Mvelo, my baby, do not let this break you. You are beautiful and talented. I love you🌹

My heart broke…And she’s been struggling with Depression from a while back… https://t.co/NJTYZfhgpR

Mvelo has since headed the advice of people that support her and seems to be focusing only on the positive.

She posted a snap on Instagram, looking happy with the caption "Be still" which is derived from the Bible.